Rory Burke had a grand-mal seizure out of the blue while driving to work. It was while at the hospital he was diagnosed with an Oligodendroglioma.

It all started in February 2012. I passed out at the wheel while driving to work. At the time I had no idea what had happened, but fortunately, no one was hurt. I was just five minutes from the motorway so very blessed that I was not far from home.

I was taken to the hospital and looked over. I also had an MRI. It was there that they found I had a brain tumour. It was clear at that point that my crash was due to a grand-mal seizure.

I would go for MRI check-ups every 6 months and in 2016 the tumour started to grow again so I had radiotherapy in November/December then PCV chemotherapy in early 2017.

Now I am still on 6 monthly MRI and continued management of my epilepsy. Therefore, at this time, I still have a brain tumour and go for MRI checkups every six months to see it is not grown any further if it does I may need to have more treatment.

How are you feeling now about everything?

I have chronic fatigue. I am also on medication for seizures. I am taking Lacosamide; Keppra; Clonazepam; Sertraline, Fycompa to keep the seizures under control.

I have had slight balance issues. Weak left arm, my hand especially. I had a paralysed left arm which over the last 7 years worked to rehabilitate it which I have spent years rehabilitating that part.

If you are living with a brain tumour? Don’t look on the internet about brain tumours. Go to your doctor or brain tumour support charities.

I now focus on living a positive journey whatever that may be from day today. I continue to work on my rehab and support Brain Tumour Research raising awareness and money for them.

I like to challenge my mind and body. I have raised funds by doing a number of things including ‘Ride A Bike’ challenge three times. I have also got my company involved with ‘Wear a Hat Day‘.

I am motivated by living a positive life and living life as it comes.

They are two sets of people:

I played against Argentina at rugby when I was younger at U18 age group for Middlesex.

Conclusion: Thank you, Rory Burke, for sharing your story. It is amazing you were ok after your grand-mal seizure while driving. May that Oligodendroglioma stays quiet forever. 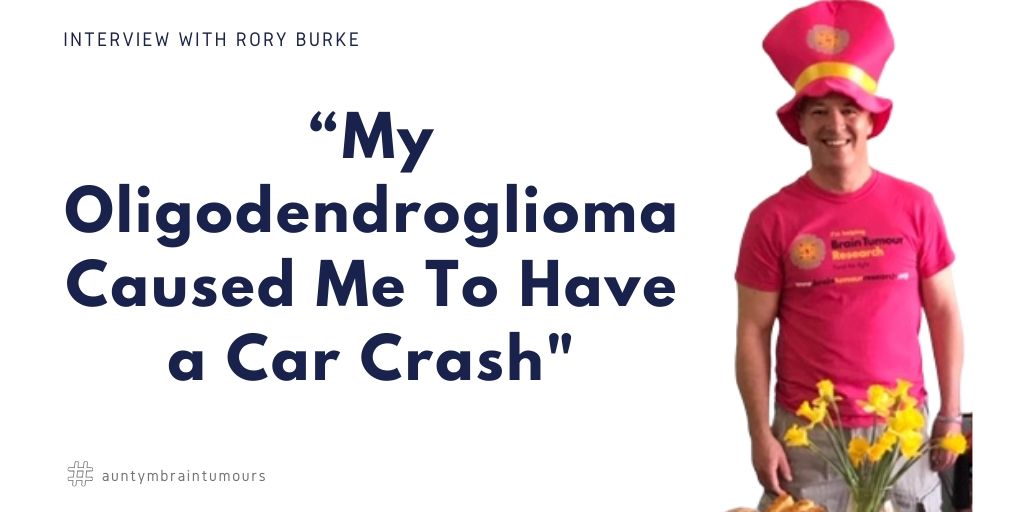