Who is Brain Tumour Support?

Brain Tumour Support is uniquely dedicated to providing support for anyone affected by any type of brain tumour, at any point, from diagnosis and for as long as support is needed. They are here, not just for the patients themselves, but also families, carers and loved ones who are dealing day to day with the impact of a brain tumour. Brain Tumour Support provides specialist, tailored services through one-to-one and group support, as well as online and telephone support and specialist counselling.

Who Is Tina Skinner Mitchell

Tina is the Brain Tumour Support Chief Executive Officer. I have had the pleasure of meeting Tina on a number of occasions since 2013. Originally I asked her to share her story and her reason for setting up Brain Tumour Support which at that time was called ‘Hammerout’:

My husband Paul was diagnosed with a brain tumour in 2001.

When we first heard Paul’s diagnosis, it threw our world upside down and we didn’t know where to turn or who to turn to at that point. We were told in the consultant’s room that Paul had a ‘Mass on his Brain’.

We had no clue what that meant. We were told the mass would be checked with a biopsy for what type of brain tumour.

I know that sounds strange now, as I am now leading ‘Brain Tumour Support’. We had no idea what a brain tumour was.

Paul said to me “I hope they work out what is wrong with me so we can go to Church Camp”. We had only recently joined a new church, me, my husband and our 4-year-old son, and we wanted to be a part of the event so we could get to know the church community more.

I remember saying to the specialist ‘Oh ok, well will this be sorted quickly as we have a Family Church Camp to go on in a week’s time’ and it was important to us to go?’.

‘I don’t think you realise how serious this is’

The specialist looked at us and said ‘I don’t think you realise how serious this is’. We really did not realise the enormity of the situation.

Things started to get very real. Within half an hour, Paul had a grand mal seizure right there and then. The doctors said this was now an emergency situation and he would have the biopsy that day.

Paul’s body was shutting down and whereas he was meant to get to a different hospital for the biopsy the following week, he now needed to have an immediate craniotomy and would be taken by ambulance from Southmead hospital to Frenchay Hospital.

I then called his parents to explain what had happened and to get to the Frenchay Hospital as soon as possible and I also called our Church vicar to come and pray with us.

Our son was at a friend,s house and I needed them to have him stay overnight. I had never been away from my son overnight and it was really hard to do that.

Paul had the biopsy that day and we then had to wait 5 days to hear the results. It was then we were told it was a grade 4 Glioblastoma Multiforme and he had a life expectancy of 6 to 18 months. In fact, he lived 18-month almost to the day.

In the 18 months, we felt very much alone. There were no places for support for brain tumours near us.  We couldn’t talk to anybody who was going through the same thing. We felt very isolated.

‘we felt very much alone’

During the 18 months I still needed to live life and work, be a mum and a wife. I felt very lonely and lost. I was doing the daily routines but, numb.

There was no support in or around Bristol where we lived. The closest support was in London at the Marsden hospital. I wanted to put in place what was missing from our life, which was Support around Bristol.

Paul was unable to work or be an amateur footballer, which was his passion. He became very disabled on one side and partially sighted. He would bang into things. He really wanted to connect with other football lovers who couldn’t play anymore. He would go on about it daily. He became very obsessive about the idea to start a group of some kind.

It was our Macmillan nurse, Toni Lawton who had been helping us and she was amazing, and we wanted to give back so we did some fundraising. We also wanted to help Macmillan as we found in 2001 there was hardly any Macmillan nurses back then.

We wanted to make an extension of what Toni Lawton was giving to us. We wanted to put support groups together in the area and when people needed support that was nonclinical, we could help with that. Therefore, giving support to the Macmillan nurse.

‘We joined Hammerout and Macmillan together and our first support group’

After lots of planning, we joined ‘Hammerout’ and Macmillan together and our first support group was set up for March 2003. Paul died in the following January but, he was able to see his dream come true and he knew he had left a legacy to be proud of.

My connection with Brain Tumour Support:

I have had the pleasure of meeting Tina and many of the Brain Tumour Support Team on a number of occasions since 2013. The charity very kindly asked me to join their ‘Weekend 2019‘ event in the Spring and be one of the Speakers. A weekend which brought together over 180 people – patients, loved ones and carers, leading figures in neuro-surgery and research, clinical nurse specialists and other health care professionals, medical and support services. 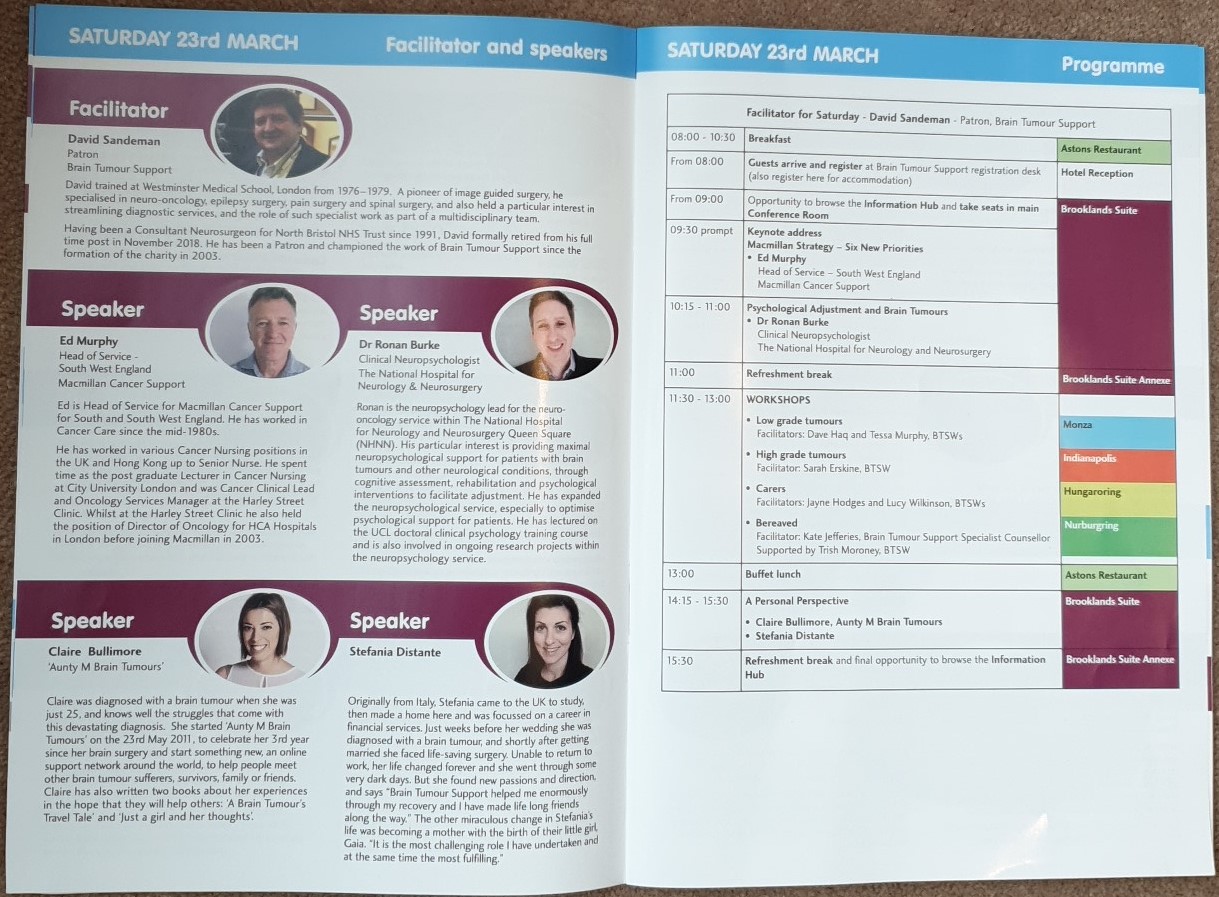 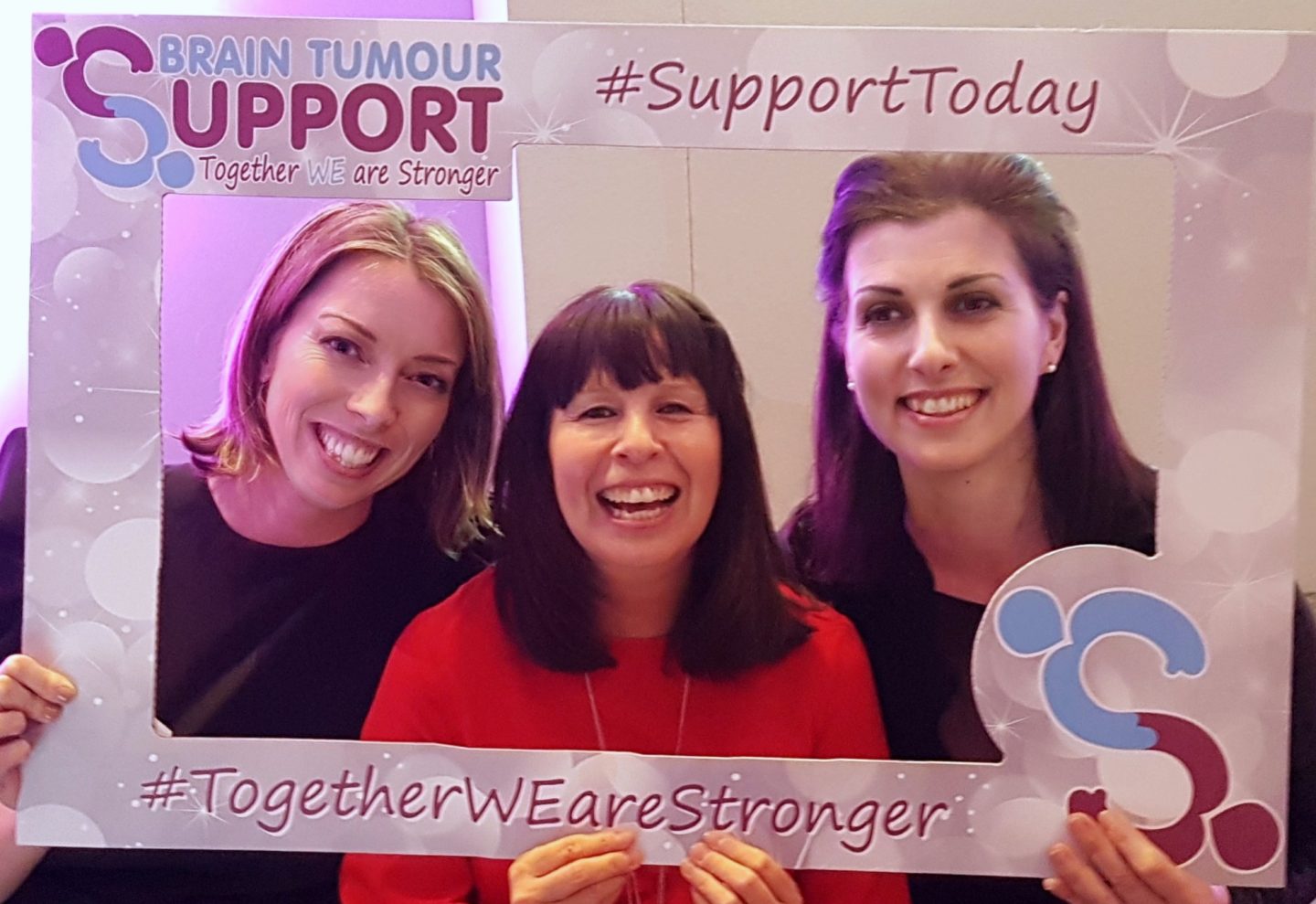 Brain Tumour Support really helped me on my ‘A Brain Tumours Travel Tale’ Book Tour. They invited me to a few of their Support Groups.