In July 2016 I had the pleasure of interviewing ‘musician’ Sam, aka Laptop Philharmonic.

You can listen to his original interview about being diagnosed with a brain tumour here.

He shared his personal story about when he was diagnosed with a brain tumour and how he wrote music to channel his feelings about the experience.

Sam had been having seizures on and off for over 4 years. It was in 2013 after feeling unhappy that the doctors were not taking his case seriously that he and his wife insisted on having more investigation.  Eventually, his GP set him up for an MRI.

He finally met a neurologist to discuss his results, and he was given the news that they had found a brain tumour. They wanted to operate quickly.

It was through this experience that he wrote the album Laptop Philharmonic. He tells the story of when he was diagnosed with a brain tumour and his recovery. In addition, he put Laptop Philharmonic together because he wanted to share the insights he had with the world. Sam finished our interview with these words.

“It ended up being an incredibly positive experience, and I hope to pass some of that on to people.”

Now two years on Sam has a new single out in January 2019, and we catch up on how he is getting on!

Hi Sam! How are you feeling now 5 years on from your diagnosis?

Fine, thank you! Quite tired, but I think that has a lot more to do with having a 5-year-old daughter to attend to than it does with my diagnosis.

How is everything going with the first album Laptop Philharmonic?

It’s up on Spotify now and on most other major music store/streaming things. I’ve had plenty of positive feedback, certainly enough that I think it was “worth it” so to speak.

What is your new album My Other Face all about?

Ah, now that would be telling. With Craniotomy, it was obvious what it was all about, and I had a clear story to tell. But it did occur to me that one thing I’ve always liked in work from other artists is trying to unpick the meaning of whatever they’ve produced.

I think if I leave people to ponder on the meaning of my new album, they might understand it on a deeper level if they work it out themselves than if I just told them. Kid A had that effect on me – once I’d started to understand what it was all about, its message hit home much harder because I’d had to work to understand it.

Other Personal Stories To Read:

Living With A Meningioma: I Won’t Let My New Diagnosis Define Me

I Was Diagnosed With A Central Neurocytoma

Why Do I Blog About Brain Tumours And Breast Cancer?

Are you struggling with anything since your diagnoses and recovery?

Not really with anything relating to my diagnosis or recovery other than feeling a bit on edge when it’s time to see my consultant for a check-up. There are plenty of other struggles to keep me occupied though.

What do you do now in your life other than music?

I work as a web developer, I run around after my 5-year-old daughter, I code in my spare time, and I like to draw. Occasionally I have a sit-down.

My faith. I’m a Christian, and that underpins everything for me. It means I want to be a loving, gentle, kind… it means I aim to be a good person all around, although I often fall short of it.

Is it a cop-out if I say I think that there are lots of people who are heroic at times out there? All the ones who just quietly get on with trying to do good things. The ones we probably don’t even notice because they’re too busy just getting on with it.

What would you say is the most exciting thing you’ve ever done since your diagnosis?

Releasing my music into the wild! I’d been producing music for years, but never had anything I was happy enough with to share around. After the operation, I gained a new determination and focus that hasn’t gone away since.

Maybe it knows how much of a burden you are to everyone who cares about you. You can’t really do anything about it – your body has to recover at its own rate, and no one can reasonably make major demands of you while you’re still in recovery.

My wife was about 5 weeks of giving birth to our daughter when I came out of surgery. Also, it was a very hot summer in 2013. It was really hard for her.

On a practical level, not being able to drive doesn’t make life any easier…

For people or loved ones that get daunting diagnoses, do you have any advice?

That’s a tough one – I guess things can be very different depending on what the diagnosis is, and what suggested treatment you have. I can tell you that my Christian faith was super important – a real source of comfort and strength, and who knows what kind of state I’d have been in without it.

A practical tip might be to take something warm to the hospital with you… I remember being rather cold at night when I first went in.

I have the world’s highest score in the little-known video game Ostrich Island. Well, last time I checked anyway.

You can listen to Laptop Philharmonic Original Interview Here: 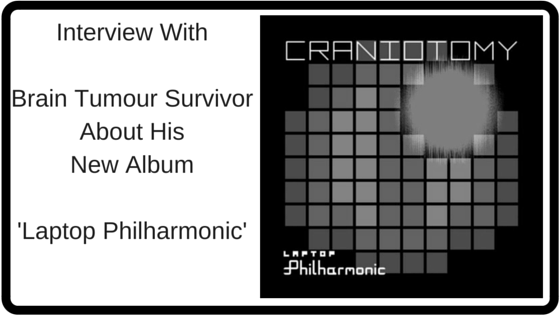