Julie is a mother of three and was diagnosed in 2011 with an inoperable Meningioma. She had been suffering from debilitating headaches for years. After it was getting too painful and no painkiller was helping, Julie asked her GP (General Practitioner) to investigate more in-depth.

An MRI showed a 5cm brain tumour was resting on the transverse sinus. She was able to have surgery two weeks later, and the surgeon was able to confirm the Meningioma was benign.

Although that was a relief for Julie and her family, the surgeon explained that he was unable to remove the tumour completely. It was attached to the transverse sinus and it would be too dangerous to remove it entirely.

After Julie’s surgery and recovering from all the problems that came from her surgery, it seemed things were going well and life was going back to a more comfortable way of living, she was able to work and even go back to college to get a degree.

I originally met Julie on my Facebook Group in 2012 and then had the chance to interview her on my ‘Brain Tumour Thursday Radio Show’ in 2014.

Listen to the segment of our interview in 2014

After being a person who was looking for support, soon it was Julie giving others support. She went on to join the Brain Tumour Support as a Support Group Worker. Things were going well.

Until now! Six years on from her original diagnosis, Julie shared that her tumour had started to grow again and she was back on the battlefield to follow the surgeon’s expertise in how they would be treating the new invader.

How are you doing since your new diagnosis?

I was in shock and disbelief that it was back, like a numbness.

I did struggle with my emotions in the beginning and was able to access some counselling, although it was not the best and I ended up leaving the job I loved, managing a nursery as it all became too difficult.

What do you do now in your life in the week?

After I left managing a nursery, I decided to train to become a counsellor. This took 4 years of study and practising counselling, I qualified in November 2017.

In December 2017 I left my Brain Tumour Support Worker position, my dad was very poorly, and I wanted to pursue a career in counselling.

In May 2018 I set myself up as a self-employed counsellor and so during the week I see clients; both children and adults. By seeing children, my degree is no longer wasted.

I am also studying a Diploma in Psychotherapeutic Counselling, which will give me some more confidence to set up an independent practice.

I love walking my dog, looking out across the bay, every day it looks different.

This might sound strange, but my brain tumour motivates me.  It does not define me in a negative sense. Instead, it makes me determined to achieve, to make the most of life.

I especially like the outdoors and walking my dog. I have 3 daughters, they also motivate me, I want to be a part of their growth and independence.

I really don’t know. However, I do admire all brain tumour patients and their carers. Someone like you Claire, I found your facebook support group invaluable in the beginning.

What would you say is the most exciting thing you’ve ever done since your diagnosis?

On my daughters 21st birthday we climbed Mount Snowdon, it was a struggle, but with the support and encouragement, I made it.

I braved a busy, loud place and saw the singer Paul Young, I was so close to the stage I held he had for a few seconds!!

I think the toughest challenge is finding normality, and accepting that it’s likely to be a new normal. I believe this entails grieving the old self.

Any advice for people or loved ones that get daunting diagnosis’s?

Access support when the time is right for you, whether it be support medically through a clinical nurse specialist, accessing local practical support and information, emotional support, and making contact with others who have also been affected.

I am so glad to be a part of Julie’s life and having seen all the amazing things she has done over the years since living with a Meningioma.

She shows that although life throws you curveballs, she is never giving up on living the best life as she can and will continue to do so.

Do you know of someone living with a Meningioma? 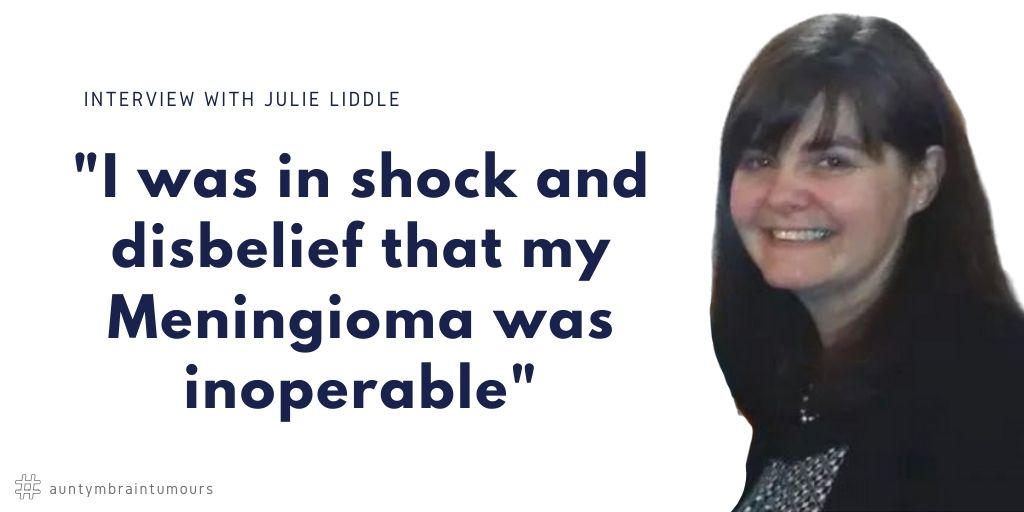