Meagan Sutherland at the age of 18 should have been enjoying her days being a student. However, in May 2008 Meagan was going through terrible headaches and blurred vision. She would soon be told she had a Central Neurocytoma. Here is her story:

Hi Meagan, how did you find out about your diagnosis?

I had been having headaches for years. I was driving on my way to see my mom at our country club when all the sudden I had double vision. I pulled over and called my mom. We agreed I carry on to the club as I was only a few minutes away.

My mother took me to the eye doctor, curious as to what might be causing the double vision. The optometrist dilated my eyes to do an exam. He looked at me with pure shock. He said there was something obstructing the view to the eye.

He called over to the local hospital and got me in right away for an MRI. When the results came back, the technician was visibly shaken. He told me that I had a mass on my brain.

They told me that the hospital in Royal Oak, Beaumont, has a renowned neurosurgery team. I rode in an ambulance over to Royal Oak. I remember it being so noisy and shaky in the back of the EMS truck. My head was throbbing and my eyes were bulging.

I arrived at Royal Oak late at night. I was 18, so they put me in the PICU. I met my neurosurgeon that night. She was the #1 pediatric neurosurgeon in Michigan.

My family had faith in her and it made me feel a little bit at ease. 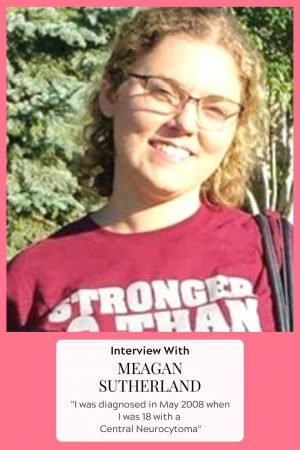 In May 2008 I had an 8hr brain surgery to remove as much as possible of the brain tumour.  In August 2008 I had Gamma Knife for 2 hours to remove any remaining tumour.  The gamma knife radiation was disgusting.. when they fastened the Halo to my head, they used a hand drill. They drilled it in at four places.  I could hear my skull grinding. I was kicking and screaming.

They managed to remove the tumour but in March 2009 I had a brain cyst develop from the strong radiation. I chose to have a reservoir installed in  April 2009 to help with this.

When I was discharged I was left with left side weakness and aphasia. I had outpatient therapy set up. I truly fell in love with my speech therapist, Jenny. She was the COOLEST! I was also doing occupational therapy and physical therapy. Rehab was SO fun for me. I had a blast interacting with all the patients and therapists. After my rehabilitation, I was able to head back to school.

Reservoir was not working

The reservoir gave me severe left side paralysis. I could not retain anything when the reservoir was in my head. In 2011 it was decided the reservoir would be removed as it was causing more problems and good.

My Confidence Was Lacking

While I was recovering I found all my friends all had a really nice summer internships and such. I got really hurt by this.

I found it so hard to connect with anyone. I also tried my hardest to find a job. But I had very little confidence and not so much luck. I eventually became SO depressed I couldn’t get out of bed.

My parents hospitalized me for my depression because I became unresponsive. That was the hardest thing I went through for sure. Living in a mental hospital for two months.

Now I’m still struggling with my aphasia but my physical well being is awesome. I can’t complain, just dying to get back to school. I may have to give up on that dream, but man have I fought for it. 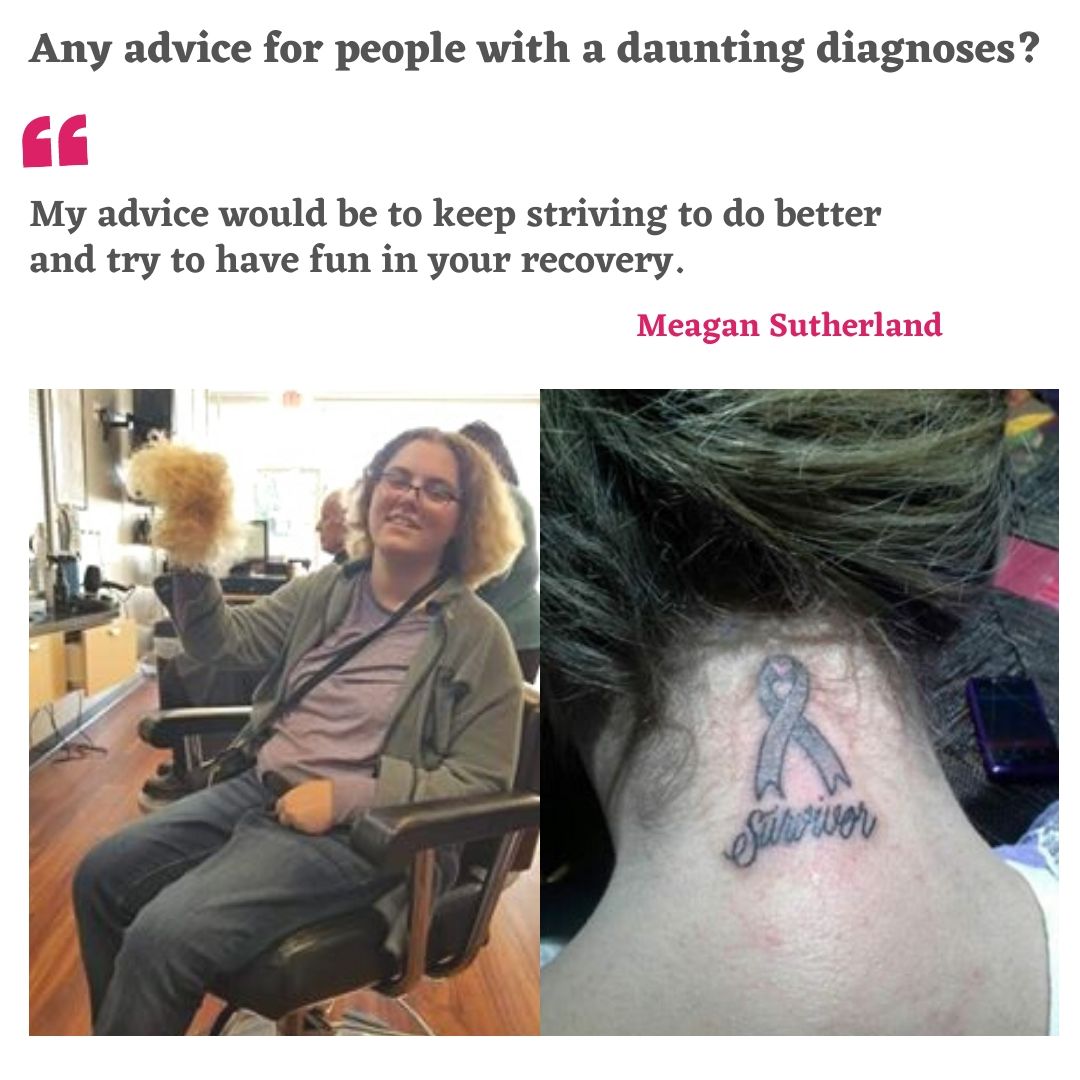 I now volunteer my time at an adult foster care home as an activity director. I really like helping others.

Now I work part-time jobs. I also volunteer my time by planning events for Wigs for Kids and mAss kickers foundation

I also help others who have gone through a brain tumour ordeal. I set up a Facebook Page called Brain Tumour Life Coach.

I started it so that I could share the important information that I related to being a survivor. I try to depict to family members what it’s like It was so hard when I couldn’t even get my family to understand that I still wasn’t healthy after my first craniotomy.

My family motivates me. They are all such amazing terrific people. I just want to make them proud.

What is the toughest challenge a survivor face?

The toughest challenge a survivor faces is learning how to face the world again.

My advice would be to keep striving to do better and try to have fun in your recovery.

Conclusion: Meagan Sutherland Keep Doing What You Are Doing. It is great you want to help others and share your personal experience. Keep up the good work!

I Was Diagnosed With A Central Neurocytoma

I Was Diagnosed With An Intraventricular Meningioma

I Was Diagnosed With A Craniopharyngioma

I was diagnosed with a Hemangioblastoma