I Have an Inoperable Oligoastrocytoma

Starting At The Finish Line by Matthew Newman

Me and My Left Frontal Parasagittal Meningioma

I was Diognosed with an Acoustic Neuroma

The Book A Brain Tumour’s Travel Tale follows the story of Claire Bullimore. It showing the true emotions and hardships of a brain tumour diagnosis, surgery, recovery and then the scars inside and out.

Claire Bullimore and her symptoms:

In 2008 Claire Bullimore was diagnosed with an Intraventricular Meningioma. Her brain tumour story is here to show that even with disabilities and with a crippling anxiety disorder, you can do anything if you put your mind to it, even if it is somewhat damaged.

For at least 10 years prior to her brain tumour diagnosis in 2008, she had been having headaches. She was able to control them with the usual aspirin you can buy over the counter. However in late 2007 when she was 24, her headaches were getting worse and more frequent.

After months of being misdiagnosed and suffering from migraines, change in her personality and her behaviour she was getting very confused and forgetful, terrible ringing in her ears. Nausea, vomiting, visual disturbances and speech problems.

At the time, I was working in an investment bank within their recruitment team in the city. I loved the London hustle and bustle that goes with a city job, but in 2007 the hustle and bustle became very hard on me.

I went to my doctors for a blood test and it showed I had very low ferritin levels. They put me on some ferrous sulfate tablets. I said I was really struggling with my headaches and that it was causing me sleepless nights. They seemed to just brush off my concerns and sent me on my way.

One night I was sitting in the office and we were all going out for a dinner and to an awards ceremony. I said to my supervisor that I wasn’t feeling too good and that I had tunnel vision.

I suggested I should go home but she said it was really important that I be there and that I would be fine (I think I could have done with assertiveness lessons at this point). I just couldn’t see properly. I found that if I sat still my vision would start to come back. I grit my teeth and got on with it.

The following day my boss wanted to chat. She asked, ‘was I happy at work?’ I said ‘yes, but my headaches were getting worse, especially in the mornings.’ Like many of my work colleagues, I would need to wake up at 6.30 am every day to get to work by 8am. I didn’t really have much support from my boss, so I decided to find a new job.

I wanted a job which was nearer to home so that I would be able to have more time in the morning which helped me cope with the headaches. I gave in my one-month notice to leave and then looked for a new job.

In the beginning of December, I found a job that had better hours. I really enjoyed the new role and worked hard. But, in April my memories and my recollections of things were starting to disappear. I couldn’t separate my thoughts and was constantly angry inside. I was forgetting important things which was starting to have an impact on my job.

In May 2008 my headaches were excruciating. I had never felt anything like it. It was like somebody was grabbing my head and slamming it against a concrete wall. I tried the usual tablets, but nothing touched the pain. I could only cry and pray that it would stop soon. I was in so much discomfort, I would be sick. Night and day were just as bad as each other.

I would dread waking up.

My speech was starting to jumble up during conversations. I would say the completely wrong word.  I was having problems with my eyes where my vision would go and come back, even though my eyes were open.

One morning I called into work and said I would be late. I drove down to my general practitioner and went to tell them I needed help. I shared a list of symptoms I had been struggling with:

The doctor looked at my list of symptoms and she said, ‘I don’t know what is wrong with your vision, but let’s see if it is related to your ferritin levels again’.

I decided to take myself to my local optician for an eye test. The optician looked at my eyes and I could see she looked concerned. She said that she thought that it might be cysts in both eyes as she could see bleeding pressure on the eyes.

She asked me to go straight to the hospital and said that she was going to call them so they would know to expect me. After a number of tests including an MRI, I finally saw a doctor about my results.

The doctor showed me the MRI scan. ‘This is the tumour,’ he said. ‘Tumour! Will I die?’ I asked. He was giving me no hope. I just sat there looking around the room trying to get my head around it. 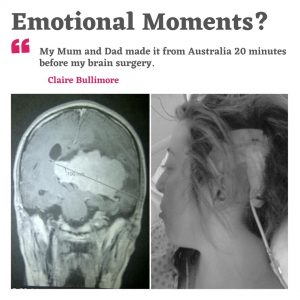 I was booked into the hospital that night and prepared to have surgery a day later. I was introduced to a brain surgeon, Dr Minhas. He explained what was happening. He discussed potential risks, such as problems with balance, coordination, speech, vision, memory or muscle function, depending on which area of my brain was being operated upon.

He said he would not know the extent until we were in surgery.

Ten hours later from my surgery the surgeons said the operation was a success and they felt they had got all the tumour out and they were sure it was a non-cancerous meningioma.”

The Book A Brain Tumour’s Travel Tale follows my story, showing the true emotions and hardships of a brain tumour diagnosis, surgery, recovery and then the scars inside and out.

Buy Your Own Copy Here