Things I Have Learnt From My Brain Tumour Experience

Interview with Claire Snyman: My Colloid Cyst Changed My Life

I was Diognosed with an Acoustic Neuroma

My Pineal Cystic Tumour Was Not Inoperable

Victoria And Her Meningioma Story

Brenda Ravening, 64, had to do precisely that when she was diagnosed with a Hemangioblastoma. Her tumour had been growing on her spinal cord and needed to be removed as soon as possible.

Brenda was just 54 at the time of diagnosis and a mother of two. Working full time as a lead person in education, responsible for safeguarding more than 500 children.

No Mother Wants To Tell Her Family She Has A Brain Tumour! 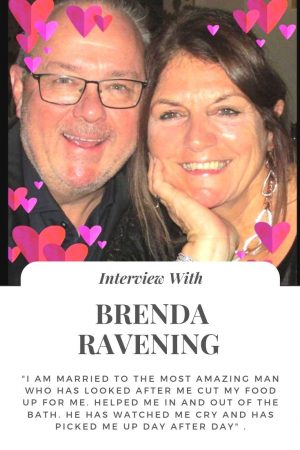 Here is her Hemangioblastoma story:

Hi Brenda, when were you diagnosed?

I was 54, and I had started to get a weird feeling in the fingers on my left hand. I thought it was arthritis. It had gone on for around four weeks, and then I thought I had better see my GP. At the time, there were only 2 GPs in my doctors.

The Doctor diagnosed that I was stressed from my job, so he gave me antidepressants. The following month I noticed it was travelling up my arm. It felt fat heavy and tight, almost like I had a boxing glove on my hand. Back to the Doctors and he immediately said I hadn’t been on the antidepressants long enough. So, hey ho more antidepressants.

The next month, the third month, I went back and saw the same Doctor,  because I thought the continuity would be good. By now, it had gone up the whole of my left arm across my left chest and stomach area.

Month 4. By now it had got my arm, chest, stomach, rectal and vaginal area and gone down my leg.

So, I decided to see the other GP in the practice.

As soon as I told him my symptoms and how it started, he said the words ‘you need to see a neurologist’. I knew from then I had a brain tumour.

“I can honestly say I never googled a thing”

I went to Charing Cross hospital and saw Mr David Peterson the neurologist. There was a young doct0r in there as well. Mr Peterson had previously operated on my husband. So, he was chatting with my husband, I gently reminded him this was my appt.

So, the next step was the MRI with contrast. I by this time was behaving strangely I was writing sideways. I was still working full time.

The last day of the school summer term I went for the results of the MRI – I knew it was a brain tumour. We walked into the room I saw my MRI with this white blob on it. Mr Peterson was sitting there with a stern face. He said I am really sorry to tell you, but at this point, I got up and started ranting and crying. Why have you waited so long to give me such bad news? He said he had only just seen the MRI.

“So, when people say no news is good news, I am sorry that’s not true”.

He then opened his diary and booked me in for removing the tumour. We asked whether time was of the essence and he said ‘put it this way you haven’t got till Christmas’. The risks of the op were put out there.  Symptoms could get worse. Paralysis or death. Not much to say I had no choice.

“My husband and I just held each other and cried. I then had the task of telling my children, they were both in their 30’s but still my babies”.

I arrived at Charing Cross on a Sunday afternoon on the neuro ward. With both my girls and my husband. I looked around and there were people walking around like zombies I couldn’t bear to look at them. They all walked dazed and with strange arms.

Had my 6-hour op, woke up and my symptoms had got worse, the heaviness was causing me a lot of stress, I couldn’t stop crying and I felt like there was a suitcase in my stomach. So I was put on steroids, by Wednesday I was one of the zombies walking around. Lord, help me. I was told on Saturday morning it was a grade 1 haemangioblastoma.

“I came home like a zombie who hadn’t washed her hair for weeks”.

But I was alive. I walked like I was drunk. I started to take myself out for walks around the block holding on to the walls as I walked, I did word searches to keep my brain working.

I couldn’t use a knife and fork couldn’t do buttons or laces etc. I lived in a tracksuit and survived on cake and biscuits. I put on lots of weight, but I didn’t care. Then one day I looked in the mirror and saw myself as a lump. So, then I had to watch what I was eating. My symptoms caused me so much stress I went backwards and forwards to Charing Cross having MRI’s to check for reoccurrence and or swelling.

There was a post-op oedema. I have tried lots of different treatments to try and help my problems, acupuncture, physio. Tens machine, ketamine injections. Nothing has touched it. So, it’s decided I have to live with the problems. I look normal I am not normal, and I will never be normal again.

“So many people dismiss benign brain tumours! Benign can kill”

When I got the diagnosis, I felt like my world had ended but it never, my life started over again with a new direction with new meaning. 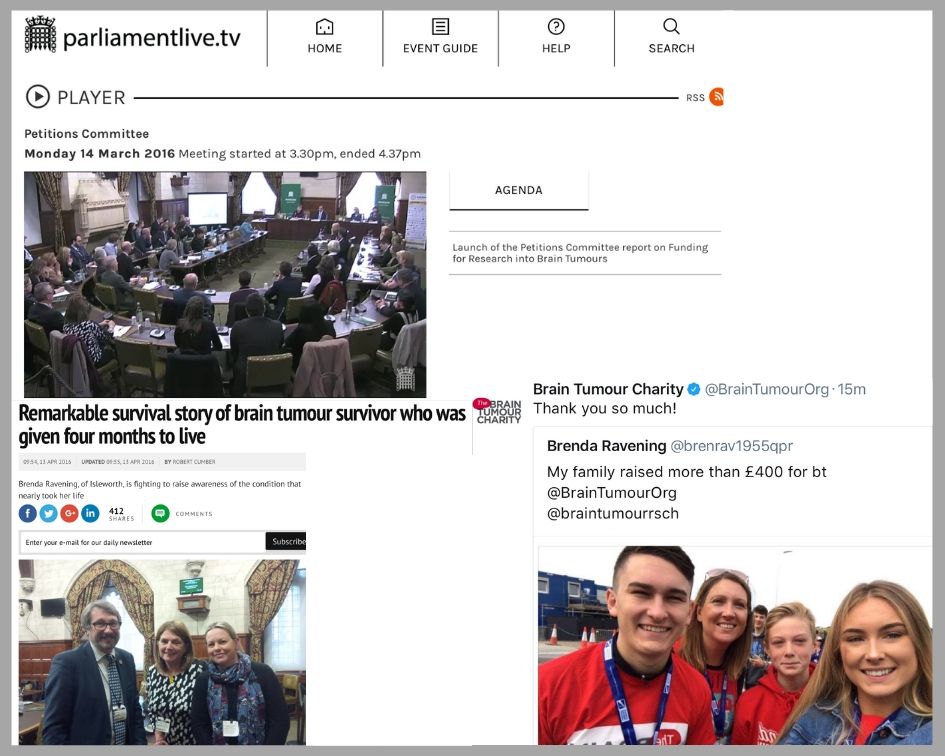 I am motivated by life itself. My family mean the world to me, my husband and my two daughters.

I am married to the most amazing man, PAUL! and mother of two wonderful children. They looked after me so much, cut my food up for me, helped me in and out of the bath. 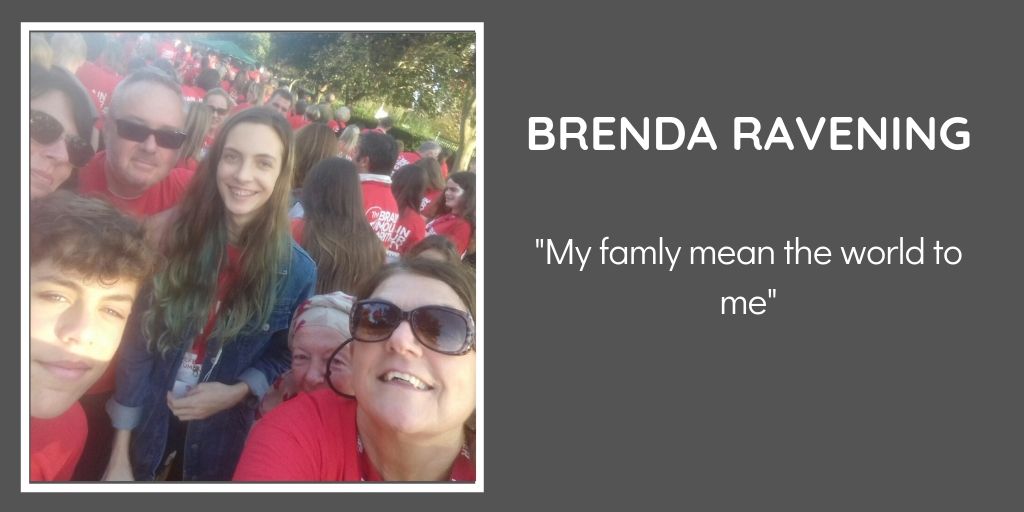 My toughest challenge some days is just getting out of bed. I swear some people wouldn’t even get out of bed if they were me. I always live in hope one day I am going to wake up and be normal haha! if only.

“I had a sister who died last year aged 61 with multiple cancers and another sister who died aged 59 numerous cancers, I am now 64, and I count each day as special for me”.

I live life to the fullest now. I don’t worry about small stuff anymore. I still have all the issues on the left side of my body, but life goes on. Most days I cope and some days I wake up and cry because I wish it would all go away, but it doesn’t. I am now retired, thank the lord.

I have four grandchildren who keep me busy, two live in Scotland, so I go to Scotland frequently. I travel a lot with my husband often to the Caribbean.

I have been fortunate to go to the Falkland Islands last year.

I then went to the Bahamas and swam with sharks and pigs.

Conclusion: Wow, Brenda Ravening, thank you so much for sharing your experience. What an inspiration you are. Not only are you still dealing with your own battles you are still reaching out to support others with awareness.