Interview with Marie Garnett: “I was diagnosed with a Meningioma, Hydrocephalus and a Chiari Malformation just six weeks after giving birth to my daughter”.

In 2015 they were investigating my post-birth headaches. I had trouble getting my diagnosis. They misdiagnosed a few times. Prior to being pregnant, they suspected Spondylosis or a pulled muscle in my neck.

Two weeks after the baby the headaches were unmanageable. I had investigations at A and E, back on the maternity ward and my doctors but they never did an MRI or CT. They thought it was migraines.

They put me on strong pain killers but it made no difference. It meant I had to stop breastfeeding. In the end, I begged both A and E and my doctor for help and I was referred for a scan.

The scan was booked with no contrast but just after the scan started they put contrast in (looking back they must have seen it whilst I was there). Four hours later my doctors’ reception rang and asked me to go in. I just knew something was wrong.

My husband was at work so I rang a wonderful friend. She came to my house straight away with her mum.  Her mum looked after the baby whilst we went to the doctors.  She held my hand when the GP said ‘I’m not going to use the word tumour (I thought but you just did) but there is a mass, there is too much swelling to see’.

The doctor sent us straight to Walton neuro but by then my husband was home so my friend took the baby and we went to the hospital. They told us I had a brain tumour and they need more detailed imaging which they did the next morning.

The MRI showed I had a slow-growing meningioma (it was benign), hydrocephalus, and a Chiari malformation with a syrinx. It was likely I had it over Seven years as that’s when the symptoms started and the pregnancy hormones probably accelerated it’s growth and increased its size. I had three brain surgeries in total.

The first one was eight hours they removed the tumour and put in am Ommaya reservoir to relieve the pressure and avoid having to put in a shunt.

The second one I had meningitis in the ventricles of my brain and needed intrathecal antibiotics so they took out the reservoir and put in an external drain to manage the pressure and give me antibiotics.

How are you doing now post-surgery?

I am good. I have hydrocephalus now so I have a VP shunt. I have a shunt to my abdomen. I have had three revisions since the original surgery but for the last three years it’s been ok and I’ve needed no surgery. We have accepted that because I have hydrocephalus there will likely be future brain surgeries. I have regular check-ups at Walton at both the tumour clinic and hydro clinic and an annual MRI.

I get hydro headaches and sometimes have to lie down, it is very linked to the weather. I have bad memory problems (short term in particular). I can never remember if I have fed the dog, I miss appointments, get easily confused and I’ve even had false memories. We have several dry wipe boards that I use to write schedules and notes down.

I took redundancy when I was on maternity leave because I was so ill we didn’t think I would be well enough to return to work at the end of my maternity leave.

Since then we found out our daughter has her own special brain and has additional needs, global development delay and is non-verbal. I stayed out of work to be her full-time patent carer and manage her disability and my own every day.

Me and my family. After prematurely saying goodbye to both my husband and six-week-old daughter I am very motivated because I am still here I will do anything to stay as long as I can. I am very very motivated to improve my health and fitness and to keep the life that my surgeon and all the staff at Walton worked so hard to keep.

I think I may have something called mortality motivation where your motivation comes from facing your own morality. It has made me make big changes in lifestyle and I’ve lost over 5st from making those changes.

Myself and anyone who goes through such life-defining moments but do it without losing the smile on their face, the sparkle in their eyes, the song in their heart.

My husband because he had to face losing his wife whilst learning how to be a first-time new dad. He managed our baby girl on his own for nearly six weeks when I was in the hospital. I had three brain surgeries in total and meningitis. It was a very frightening time. There wasn’t a single day he didn’t bring our baby to the hospital. Even the day of my eight-hour surgery I saw her after it in high dependency. He then had months off work so we could get me through recovery and we could learn how to be parents and a family.

My daughter. She is four now. She has Global Development Delay and is non-verbal. She never ever gives up or stops trying and does it all with a huge smile. If ever I think I can’t do something I just think of her and how hard just learning to walk was and I realise anything is possible.

We do sign and we do picture communication. It’s a struggle with my memory because we have to be consistent. She isn’t picking it up really either.   She can do a one-handed adapted sign for more, she can wave and she can clap but that’s it.

Three years after the brain tumour diagnosis and surgery I climbed Ben Nevis and summited. It was with my husband and family to scatter my father in laws ashes at the highest point.

It makes me so proud that I went from being unable to walk and needing two physio’s to get me from the hospital bed to the nurse’s station to climbing a mountain. On a bad hydro day, I can’t do much but on a good day, I’m an unstoppable force.

I’ve done marathons on the exercise bike and 50,000 steps in a day on a good day.

Have You Done Any Other Fundraising?

I raised money for Walton whilst I was in Walton. As with everything about me, there is a story lol

I was two surgeries down and was waiting for the infection to go so I could have the shunt put in.  I overheard a visitor say ‘look at that poor girl you don’t know how lucky you are’ but I was benign and on my road to recovery but looked really ill but the person she was visiting was stage 4 but looked well. I phoned my husband and said no one is pitying me will you shave my hair and he said yes. I also ordered ‘statement make up’ because if you are going to be bald you need statement makeup plus in my head f you looked well you could go home lol

I set up a just giving and in 48 hours I raised £1000 just from Facebook and the board above my bed. It was Friday night and Is post ‘are you in the pub? If so have one less pint and donate £2.30 to see me bald I was relentless with posts.  In the end, it was £1300-£1400 and then my workplace did a fundraising evening with tombolas etc which was wonderful. It wasn’t a huge amount raised (a couple of thousand) but I’m proud of the £1000 from my hospital bed. I think it went to the home from home part of Walton that is for families who needed somewhere to stay overnight. 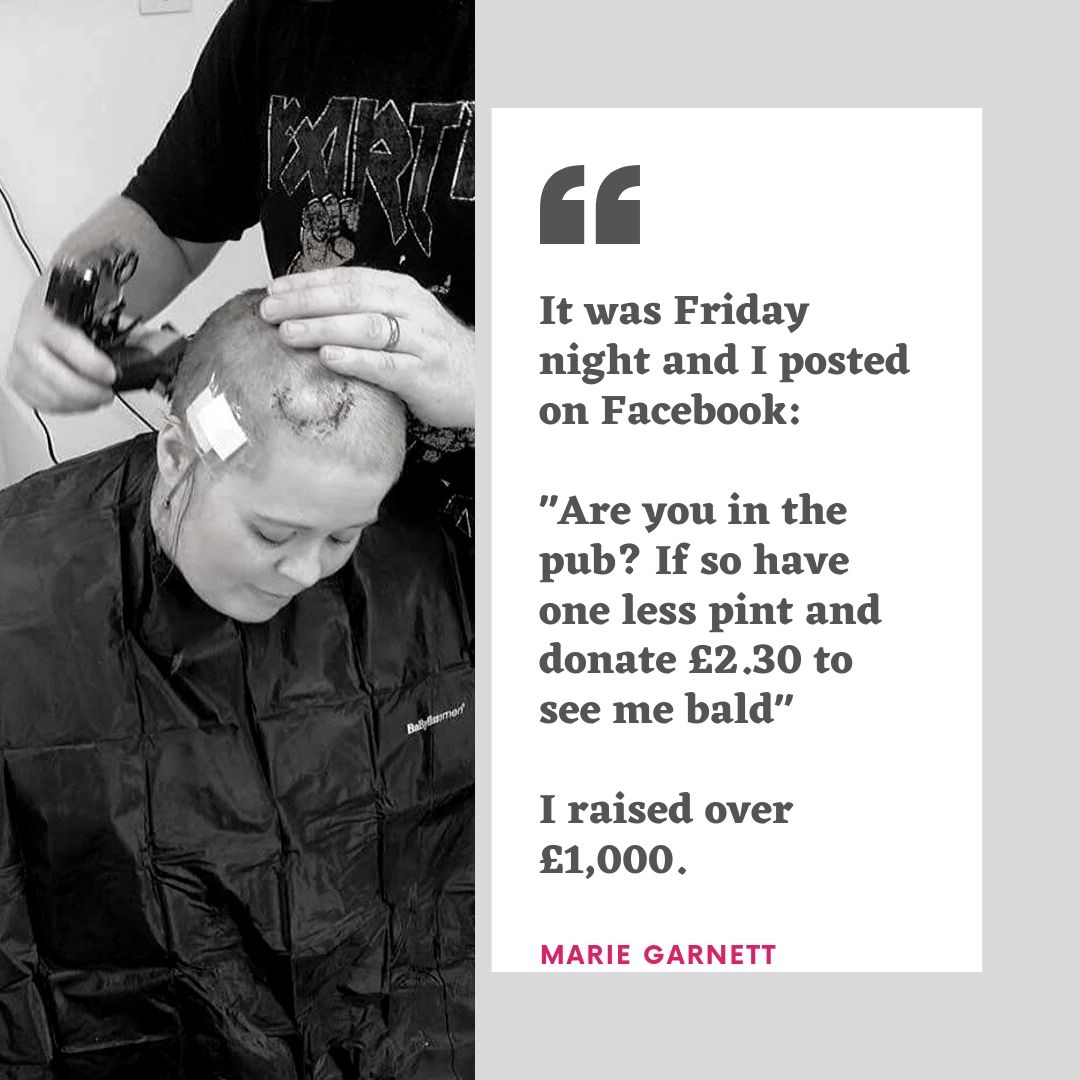 I don’t fundraise now. I do virtual running challenges where 20% of the race fee goes to various charities but that’s about it. It’s partly charity and partly to keep me healthy and moving. My focus is just on Amelia so fundraising and everything I wanted to do was put on the back burner.

Trying to get back to life because everything is different and you don’t know what your new life looks like. You have to figure out how to function in the world again and even where you fit at home because you are changed. Everything feels foreign and unnatural and you have to figure out who you are as a person.

I would like to go back to work but I think self-employment is my best option. I would struggle to manage in an employed environment. I get confused, overwhelmed and emotional and in my own environment I’ve learned techniques to manage that. 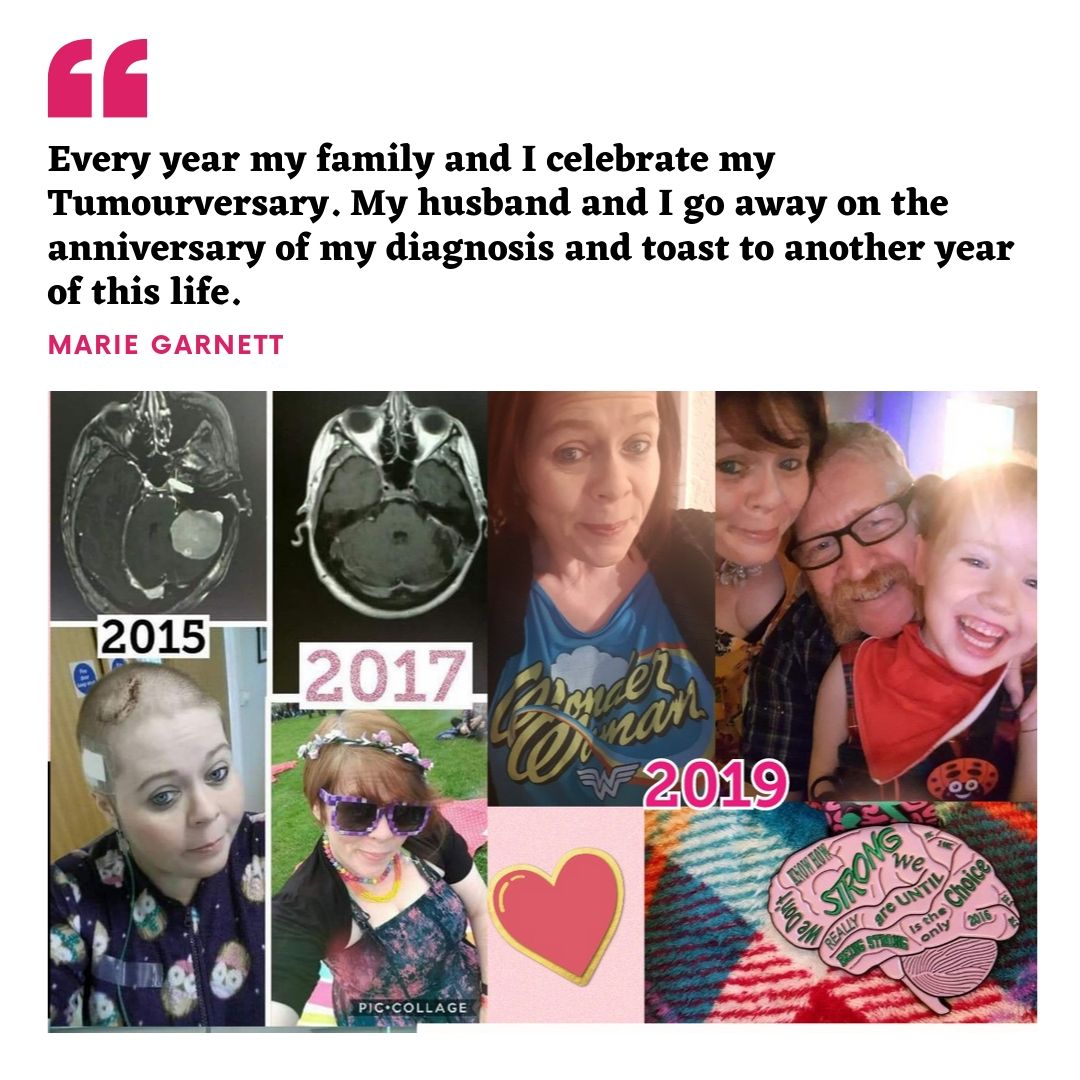 I think everyone knows everything about me. I’m an open book. I posted on social media all through my diagnosis and recovery and still post things to this day about it all and about life in general.

We do have a family motto that people might not know, it is:

Even brain surgery days aren’t necessarily bad days either.  Because if you think it was a bad day it means you are still here and still have the cognitive ability to think that way. Our second family motto appreciates the little things even doing the dishes or ironing because how lucky that you get to be home to be fed up with the housework.

Conclusion: All I can say is “WOW”, Marie Garnett what an inspiration you are. I can not believe the trials you have had and yet have the best attitude to life. Amazing! 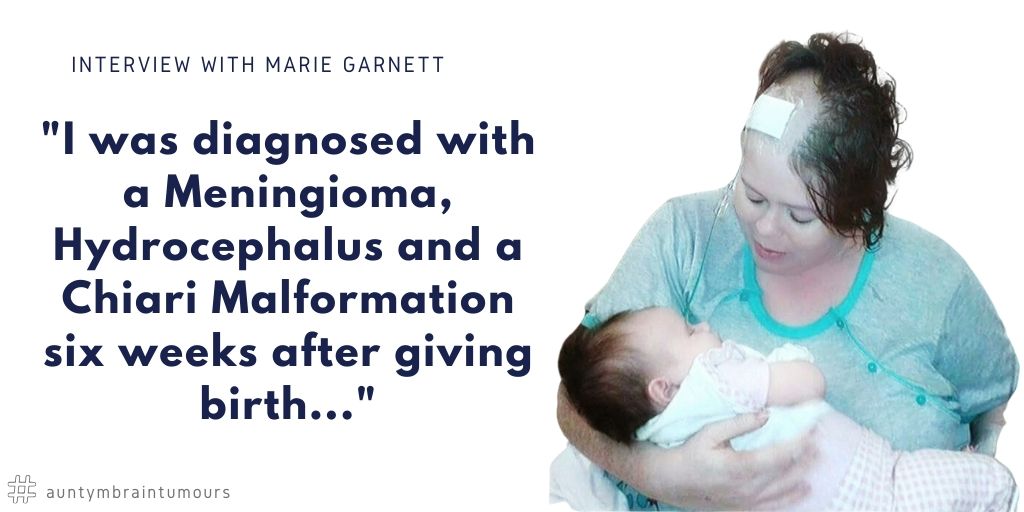 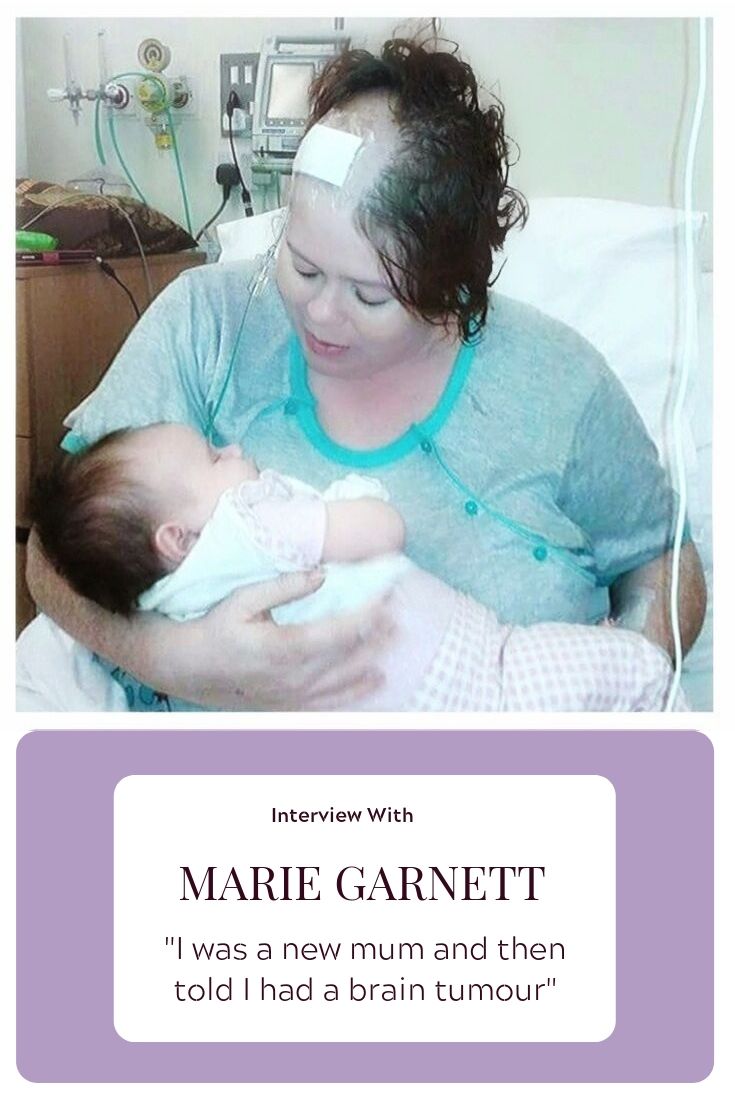