Ann Marie from Worcester Massachusetts, America shares how she had NO symptoms before her 18 Meningiomas were diagnosed. It was by chance that her brain tumours were picked up with a CT scan. Here is her inspiring story.

Hi Ann. How did you find out about your diagnosis?

In 2009 I had pre-eclampsia with my daughter. My blood pressure was not regulating and my doctor sent me to the ER. They did a cat scan to check for bleeding in my head and told me that they found something, and I needed to stay overnight, I said I can’t stay I have a newborn baby at home. My husband said he would take care of our daughter and just stay.

I had to stay in the hospital five days after giving birth. I was told I had three brain tumors called meningiomas, and I needed to see a neurosurgeon. When I got to the neurosurgeon in Worcester, Mass where I lived, he told me I had six, not three so I decided to get a second opinion in Boston, Mass. There I was told I had nine and two were big and needed to come out, so I had my 1st craniotomy in 2013 to remove two.

Every six months, I would drive to Boston for an MRI, and there was minimal growth, but I started having absence seizures. I asked my neurosurgeon at the time if I had tumors that would cause the seizures she said yes, but they don’t look like they are doing anything… Ummm what? So needless to say I found another surgeon.

In 2015 he told me I did not have seven tumors (I had known about nine and had had two removed) I had 14 and he could get all of them in two surgeries. So September 2015 I had two more craniotomies and found out I did not have 14, I had 18! but he got all except one that was attached to the main vein that runs down the centre of the brain. So then I developed a pseudomonas infection in my brain and had my right side of my skull removed and a titanium plate put in, then I had pressure building up in my head and had to have a shunt put in to help drain the fluid.

So as of June 2019, I have two tumors in my head and tumor cells, so I go back in November for my 6-month scan and see about other surgery.

I struggle every day with memory, headaches, mood.

Honestly, it takes everything I have to get through a day. Some days are better than others, especially if is going to rain, any pressure changes in the atmosphere kill my head.

Work full time, unfortunately, I’m going through separation and divorce from my husband, but I have a beautiful 10-year-old daughter who is the reason I’m alive today. She is my angel.

To be the best mother I can be to my amazing daughter, who I feel deserves better than what she got.  That was the hardest part for me coming home after each surgery looking different and seeing her afraid to come near me.

Who is your personal hero, or are your heroes?

My heroes are my mother, sister, daughter and brother in law. Without them, I wouldn’t be here today

The toughest challenge for me is losing the person I was before the surgeries. My nephew is 14 now, so he remembers the “old” me, and it kills me that him, my daughter and my other nephew didn’t get to see that “old” me. That I was fun, patient, silly, never got angry, never yelled.

Now I’m always exhausted in pain, moody, angry. It’s a new normal that I know I have to accept but I still mourn the loss of the old normal. Also losing my marriage, after 13 years with my husband ten of which we were married, it’s ending. I mean in reality, we were only married for 6 months before all this happened. I need different things now then I needed when we got married, I need emotional support now, and he can’t give that to me.

I know I can beat it and honestly I’m asleep half the time… anyone I tell my story to is always surprised by my humor in it all, and I tell them I can either laugh or cry and I choose to laugh, there are plenty of people who have it worse than I do.

That is a hard one I’m sure I have done many interesting things, but I can’t remember lol

Well after my surgeries I have no filter anymore so I have put that to good use and have become a superhero you may have heard of me…. socially awkward girl? Lol

Ann Marie Eames Belanger you are an absolute trooper. What an exhausting trial you have been on and still are. I am so grateful to you for sharing your story with us and showing that even with the biggest hurdles to overcome, people can do it every day. 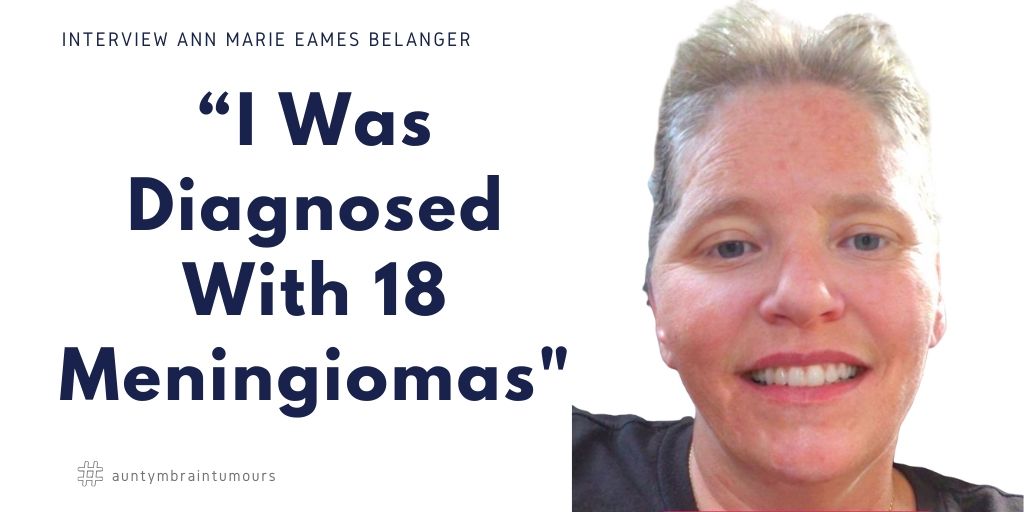