Sara Crosland was diagnosed with an Acoustic Neuroma on 18th February 2018, In the few months leading up to her Acoustic Neuroma diagnosis, Sara was really struggling on a daily basis. She was incredibly tired, wobbly on her feet, confused and generally feeling not quite right!

Sara had been working as a high level teacher at a primary school. But her symptoms were taking their toll.  With seemingly little empathy from those she worked with, she resigned from her job. She couldn’t cope with her daily duties. She started looking at a new profession, being a Photographer, something that was originally a hobby.  It gave her a chance to work at her own pace.  She took herself to her General Practitioner in order to figure out what was wrong with her.

How did you finally get your diagnosis?

Initially, my symptoms started with joint pain, skin rashes and extreme fatigue. My GP/doctor explored all sorts of possibilities including Lyme disease, Lupus and MS, as my blood tests were coming back relatively normal, my doctor, on the advice of a neurological registrar, sent me for an MRI. I was called back, seemingly under the pretense that the consultant I was due to see a week later had a cancellation that afternoon.

I was told by the consultant at the GP Assessment Unit of my local hospital that he suspected I had an Acoustic Neuroma/Vestibular Schwannoma. I remember telling him that they had to get rid of it as I had too much to do. Turns out that shortly after my tumour diagnosis I was also diagnosed with sarcoidosis.

The joint pain seemed to ease of its own accord over the following month, but then I started to have a change in the sensation in my face and my vision, when I looked to the left, became double. I also began to feel almost as though I’d just got off a boat, not wobbly as such but moving felt weird.

I was told that due to the size of my tumour, now 3.5cm, cystic and causing brainstem compression, my only option was to have surgery. It might have been a low grade/benign tumour, but it was no joke and when I look back I wasn’t in a very good position.

My surgery was scheduled for 12th May, once I had finished a course of intratympanic gentamicin injections, that would in a way chemically destroy my balance system gradually, so that my post op recovery would be faster. I was told I would be left with half a balance system that my brain would have to adapt to, and I would also be left profoundly deaf on one side.

However, 3 weeks before my surgery, I suffered a haemorrhage and was rushed by ambulance first to my local neuro centre, and then, once I had been given large doses of steroids and stabilised, I was transferred to Salford Royal Hospital, whose care I was under.

Those 3 weeks were the longest of my life. By this point I was being constantly sick each time I moved, suffered from severe headaches, became intolerant to light, couldn’t walk properly and my brain forgot how to write.

I rapidly went from being someone who was relatively active, into hiking, running, climbing, cycling etc., to someone who was pretty much confined to the sofa in front of the TV, just existing.

My surgery was a success. 100% of the tumour was removed. I am profoundly deaf on my left side and have tinnitus, but it could have been so much worse.

Initially, I had facial paralysis but this resolved itself in the weeks after surgery.  I still have some issues with balance and my vision, and I really hate single-sided deafness. If I put my phone down somewhere and it rings, I can never find it as I have lost all direction of sound. That said, there is no such thing as a noisy hotel room anymore. Once I sleep on my good side, nothing will wake me up! Every cloud…

Walking in the dark can be tricky due to my compromised balance, but I have had intensive vestibular rehab to improve this and I can do everything I did before. Sometimes it’s harder, especially as I still struggle with fatigue on an almost daily basis.  In fact, I think I’m more active and fitter now than I have been in a long time. Going through this experience has shown me that our bodies are amazing things. If we look after them, we are in a much better position to deal with the unexpected when it happens, and recovery can certainly be much quicker. 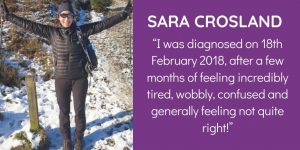 I am still building up my photography business Sara Crosland Photography . I am so glad I had this to fall back on because going to my studio, even though it’s not always busy, gives me a sense of purpose and normality.

I have also started working in schools. I hope that by sharing my experiences (coupled with my own involvement in teaching children with special educational needs) I can help staff to be more understanding of those children with sensory processing disorders, hearing loss and other hidden disabilities. I worked in this environment for 15 years, but nothing could prepare me for living this life and I hope now that I can make it easier for others. I’d also like others to hear about just how much we can overcome with the right attitude and mindset.

I am fundraising for Brain Tumour Research also in 2020. Here is all the details if you would like to support me and the charity: Sara & Danielle’s 100k Ultra Challenge

Where do I start? On a physical level, I think for me personally the biggest challenge has to be fatigue. I am hopeful that it will continue to improve, but I hate that no two days are the same and so I’m finally accepting that my plans have to remain ‘fluid’. I’m also trying to celebrate the things that I can manage to get done, rather than beat myself up over the things that I haven’t.

I have found adapting to hearing loss incredibly difficult. I knew this would be inevitable, so at the time of diagnosis I put all thoughts of it to some place in the back of my mind. I had so much to deal with that I couldn’t deal with that as well so I left it there until I was more able to address it. I am now at that point; it annoys and upsets me a great deal. I have good days and not so good days but I hope over time that I will learn to adjust.

And on this subject, other people, even those close to you, can be challenging. Once the bandages are off, the hair has grown back and you’re out doing everything you used to do, people presume you are back to normal.  I don’t think I have ever been this distanced from ‘normal’.

I have been shocked at the friendships I have lost because this happened to me. Going out socially for me now is difficult as I struggle to hear in crowded places so it’s hard staying involved in conversations. I always feel I’m missing out or people will think I’m rude for not talking. A night out now is exhausting at best, but I have a small group of supportive friends who have listened and are beginning to understand a little of the difficulties I face.

I hate talking on the phone as I feel cut off from everything else going on as I can’t hear, so certain individuals consider me ignorant for not calling them. I just don’t have the energy for it.

These days, the two places I feel most at ease are either in my living room w onith my family, or up a peaceful mountainside, where nothing else matters. I can just be alone in my thoughts.

Never ever give up and lose hope.  It’s easier said than done but changing my attitude so that I looked forward to surgery as the day I get my life back was a real game changer for me. From that point I would know what I would be dealing with.

I have a long agenda!!

Me. I don’t want to be the person I was expected to be after this experience. I’m reluctant (possibly foolishly) to accept the ‘new normal’ that others speak of. I quite liked the old me and I will do whatever I can to get that back. I am also motivated by the fact that tomorrow isn’t guaranteed so we should get out there and do what makes us happy, without worrying about what others think.

Gosh, that’s a tough one. I don’t have heroes as such, but I look up to and have great respect for people who have overcome adversity. David Goggins (former US Navy SEAL and athlete) has some great philosophies that I fall back on when times are tough. I love his quote, “Everybody comes to a point in their life when they want to quit. But it’s what you do at that time that determines who you are.”

I was recently asked to speak at a conference organised by my Skull Base Team in Manchester.

It was a bit daunting, sharing my experiences with over 300 people who were on the same journey as me. I had such amazingly supportive feedback from so many people at the end who said that I had inspired them to have a go at something they hadn’t done since their diagnosis/surgery. I feel blessed to have been given the opportunity to do that for someone.

That’s a tough question! When I cry, I now only cry with my right eye. I suppose it’s a new party trick! Oh, and when I grow up I want to be an adventurer, going to all the places that no one else dare visit!

Conclusion: Sara has been really generous with her insight into her brain tumour experience and what happened after surgery.  I hope she manages to do everything on her ‘to do list’ and achieves her dream of climbing Mount Kilimanjaro. Follow Sara on  the links below and show some love.

Have You Ever Walked Up A Mountain For Charity? 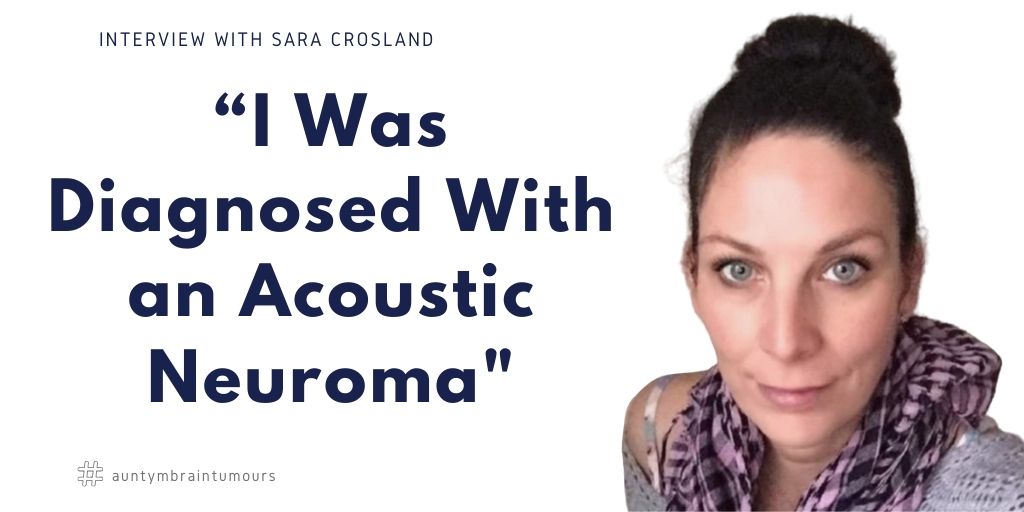