Samantha Taylor (known as Sammy) was just eighteen when she was diagnosed with a Pilocytic Astrocytoma. She should have been having the best days of her life and becoming an adult. But instead, she was suffering from regular vertigo and headaches. As a result of having brain surgery, she suffered a rare cerebellum stroke and facial paralysis.

Sammy decided she wants to help others who are affected by a brain tumour. She has set up a blog called Beauty In The Brain.  She sells bracelets that she designed, giving 10% of every sale to Brainstrust.“I am helping to support others fighting a brain tumour, one bracelet at a time” – Samantha Taylor

In 2013 I was going to the doctors with headaches and dizziness. They sent me for an MRI scan, presumably because I didn’t go very often. It was then that my brain tumour was diagnosed.

The doctors told me that because of where the tumour was, my dizzyness probably had nothing to do with the tumour and I’d most likely been born with it. They said my tumour did not need to be removed yet and they would just monitor it with MRI scans every year.

In 2016 I was told I would receive one more scan in 2018 and be discharged at that point. Luckily the “final scan” in October 2018 showed that it had now doubled in volume and my Pilocytic Astrocytoma needed surgery. I had brain surgery in 2019.

Recovery is a slow and gradual process but every day I feel there is an improvement. As a result of the surgery I have nerve damage and have facial paralysis on the right side of my face, slower motor skills in my right side of my body and also double vision. But all should improve with time and they have been.

I’m now fully independent and can read, write, wash my own hair, use a straw etc!

Because my Pilocytic Astrocytoma was in the 4th ventricle/cerebellum I was told it will affect my balance and coordination and that it could make me feel dizzy for months, which it has. But it improves all the time and I’m much steadier now than I was which is promising!

I’ve started a blog called Beauty In The Brain. I sell bracelets on my blog that I designed, giving 10% of every sale to Brainstrust and hopefully helping others fighting a brain tumour, one bracelet at a time! While I get better I am raising as much awareness as possible for brain tumours; connect with as many people as possible and inspire others to reach out and share their story too.

“something good is just about to happen” 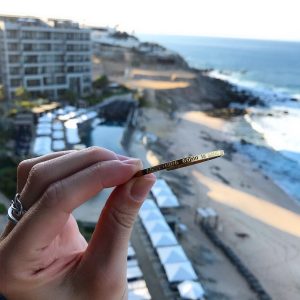 The after-effects and everyone thinking that because you had a successful surgery you’re ok. Often it’s afterwards that’s most difficult. My surgery went well, but right now is the hardest part for me – finding my new normal and learning to have patience. I’m better than before, in that I no longer have a tumour, but I don’t do things as well and struggle with things I didn’t struggle with before. I know it will take time, but everyone else moves on once you’ve had it, whilst for a while, you are dealing with the after-effects.

I  am motivated by helping others and raising awareness of brain cancer as it is often forgotten about. My surgery went well but through needing it I have met so many people who are a lot less fortunate. Keeping a blog and selling the bracelets to raise money and awareness has really given me something productive to do whilst I recover and I hope it continues to connect me with inspiring people.

My personal hero is Katie piper. I met her just before my surgery and she gave me some of the best advice ever. I just think she’s so brave, courageous and inspiring. She is evidence that you can turn a huge life event into something with meaning and purpose.

Travelling to Bali alone to teach English. It was the first time I’d ever travelled alone but it changed me in so many ways. It opened my eyes to the fact there’s a world out there, pushed me out my comfort zone, taught me how to live with others, how to live with very little (as I stayed with the locals and had a bunk bed outside and a hard-boiled egg for breakfast!) and how to live.

After that trip, I couldn’t stay in my small little hometown anymore so I moved to London – but I owe that trip the life lessons I learnt that have made things – including brain surgery- easier to deal with.

I made an appearance on CITV when I was much younger but I was so shy I barely spoke… and have never shown the video to anyone to this day!

Conclusion: Samantha Taylor you are a ray of sunshine. So positive and giving. We wish you all the best with your Pilocytic Astrocytoma and with the bracelets. Also, now I want to see the video of you with CITV… hint hint 😉

Find out more about Samatha on her Social media platforms: 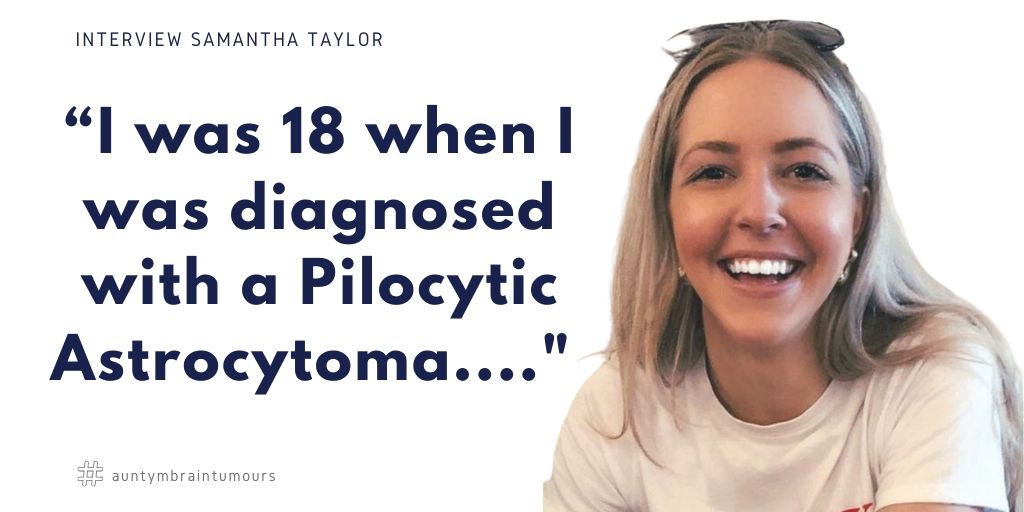