Sarah Hughes was diagnosed with an Anaplastic Astrocytoma in February 2019. Be inspired by her infectious humour and keeping fabulous while going through treatment.

Sarah, when were you diagnosed?

It all started in January 9th 2019. I was walking along Belgravia with a girlfriend when I had a weird experience of prolonged déjà vu.  I put it down to hormones. However, two weeks later when I was in the USA it started happening again on a daily basis.  After a week I decided to go to the emergency room.  At this point, I still thought it was just hormonal, or that maybe I was becoming a psychic and needed to acquire a headscarf and crystal ball!

I went to the emergency room on the 14th of February and was admitted to the hospital. After numerous tests, they did an MRI and discovered a brain tumour. I was more annoyed than anything as I had a flight booked that night and needed to cancel it.

“Cupid messed up that day February 14th, his arrow missed my heart and hit my brain!  Idiot.” – Sarah Hughes

Three weeks after diagnosis I had surgery to remove the tumour from my front temporal lobe. After one month of recovery, I had six weeks of proton radiation and one week of photon radiation. I’m currently having a rest, regrouping and checking daily to see if my hair is growing back!

I am still in treatment and about to start 12 months of chemotherapy. However, I aim to continue to enjoy life to its fullest in between the sicky bits.

“I am still in treatment and about to start 12 months of chemotherapy. However, I aim to continue to enjoy life to its fullest in between the sicky bits”.

Why is your blog called Bambi & Me?

She was the acrobatic villain in Diamonds are Forever who strangled people with her beautiful long legs.

She ultimately came to a sticky end though.

“After I started the blog I realised I was finding it very therapeutic and cathartic to get my thoughts down on paper and to spew out my frustrations and potty-mouthed profanities!”

I started the blog in Febuary for numerous reasons:

The neurosurgeon told me I might lose some memory during surgery so I just started writing things down ..  friends names, family names, bank account details, dog’s name, where I live .. et cetera. But it almost wasn’t enough… I wanted to be able to remember ‘moments’ as well.

Friends were emailing and texting often and asking me how things were going and I was copying and pasting messages because the whole situation had become so overwhelming.  It felt like I was forgetting the sequence and timing of everything that was happening around me.

And then one morning I woke up and thought…  I know I’ll start a diary style blog so all of my friends and family can read it, I don’t have to keep copying and pasting texts and also I get to remember things I’ve done by keeping the diary.

Life is a rollercoaster. You just have to hold on tight and get on with it. Surround yourself with love and remove any negativity. Love is the drug and the answer to everything.

Life, in general, it’s a challenge. You just have to face it head-on and get on with it. What is the alternative?!

I have many heroes. My husband, my son, my baby sister and my many gorgeous loving friends. I’m very fortunate to have incredible support.

The list is endless! And it depends on how down and dirty you want me to get.  I’ve travelled to many interesting places. I’ve watched a cheetah chase and kill an impala in Africa, I’ve travelled over California in a hot air balloon, I’ve flown the Florida keys in a 1940s biplane, I’ve ridden on horseback across Spain, I’ve scuba dived in many exotic and scary locations, I’ve lived on a paradise island and I’ve lived in the big metropolis. I’ve worked for a charity and I’ve worked for a large corporation. I’ve volunteered in South America and I’ve volunteered closer to home. I’ve donated my bone marrow to a stranger. I’ll stop now!

Lots of trips in between chemo treatments.  Bermuda first!

I still sleep with my childhood panda bear under my pillow.

What an amazing attitude Sarah has to life. I met Sarah earlier this year when she joined the ‘Brain Tumour Bloggers United’ Facebook Group. 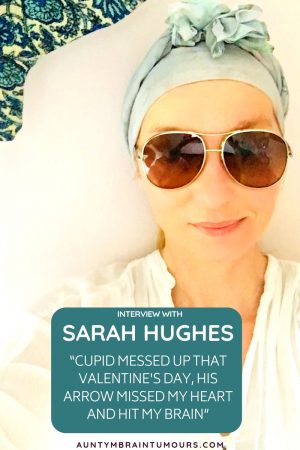