Lisa Meenan, 48, from London, was 21 when she was diagnosed with a low-grade Astrocytoma. She had been having terrible headaches and had a grande-mal-seizure.

What were your symptoms?

I was preparing to begin the second year of my degree in Architecture that September. My seven-year-old cousin (Francis) had not long died of brain tumour.  He had a cancerous Astrocytoma. We were all coming to terms with this but we were very aware of brain tumours.

Around the summer of 1992, I was experiencing severe headaches that would come on very fast and then disappear just as quickly. The headaches continued through my studying for my degree in architecture at the Kent Institute of Art and Design, Canterbury.

I decided to mention them to my mum. She encouraged me to see a doctor about them but, I was certain they were nothing to worry about.  My degree involved a lot of very late nights and I convinced myself that it was just the strain of leaning over my drawing board for long hours.

After my mum insisted I go to see a doctor, I eventually went, but it was clear that he didn’t believe me and dismissed me with a diagnosis of migraines. Not convinced, mum also sent me to the optician who couldn’t find anything wrong so I started treatment for migraines with the family osteopath.

After having put up with the headaches for months, on Tuesday 17 August 1993, I was at home, just me and my mum.  My younger brother was out with his friends and my Dad was escorting my great aunt (visiting from Australia) on a visit to some relatives.  I was meant to be going to a friend’s house for dinner but felt like I had a migraine developing.

My mum knew I was a horrible patient so moved the mattress I was sleeping on (I’d given my bed to my great aunt) into her and my dad’s bedroom.  I couldn’t deal with any bright lights and I felt sick, so I was moaning and groaning.

Intermittently, I emerged to go to the bathroom to try and throw-up but without success each time.  Mum decided she was in for a long night.  On one of my several visits to the loo (feeling sick), my frustrated mum told me to stick my fingers down my throat and get it over with – she insisted I would feel much better… I couldn’t.

At the time my mum was studying for an Open University Diploma and working on her TMA (tutor-marked assignment) for the Open University at the desk in my bedroom. So my moaning and groaning was disturbing her.

Must-Have T-Shirts: I Had Brain Surgery, What’s Your Excuse

My mum – aware that she hadn’t heard me for a while – came in to check on me and was horrified to find that I had collapsed in the bathroom. I apparently looked grey and was rigid like a board (I was having a seizure).

I still feel distraught when I think of my mum discovering me – she laid me out on the landing, told me she was shouting: “Can you hear me? Are you dead?”

I managed to answer “I’m here! I’m not dead!” Only after she got me to recite the Act of Contrition and Hail Mary did she call for an ambulance. When it arrived I was sitting up and – apparently – walked into the vehicle.

There was doubt that there was anything wrong with me. I was taken to Chase Farm Hospital in Enfield to be checked over. It was while I was there that I had another seizure. I was then taken to Barts Health NHS Trust that night with a nurse attending me.

I have no memories of that night, all of this has been shared with me by my family.

My mum re-lived that day: “We travelled home to get Andrew and then drove to the hospital. It was a very traumatic experience. You were amazing throughout although you took a few extra days before you were responding to what the nurses thought you should be able to do. I reassured them that you were doing well and you would get around to do more when you were ready! Your Surgeon Mr Hamlyn was amazing. As was all the excellent care you received from the wonderful team on Grace Ward at Barts. NHS”.

I do remember when I was waiting to see someone at the beginning/being monitored at Chase Farm, my Dad and Great Aunt were arriving home. The lights in the house were on but, neither mum or I were home and my Dad felt something wasn’t right. He called the hospital to discover I’d just been admitted.

They immediately came to join us.  He later told me he’d never forgotten the moment when the pulse monitor stopped its intermittent beeping and went into one, long, continuous beep… he thought I’d died. Medical staff quickly came and explained that I’d just pulled the pulse clip off of my finger.

Mum stayed with me through the night – I talked all the way through.  I told her that I didn’t want to live as a vegetable so I asked if she could switch off the machine if it looked like that would happen.  All topics like this so at some level I knew I wasn’t at home.

The next morning, the consultant was on his rounds and saw Mum and I looked exhausted. He told her off for keeping me awake all night! Poor Mum.

That was the first indication that I may have a neurological problem. I was transferred to Bart’s for a scan and, the next morning, I was told by a consultant that I had a cyst, brain tumour.

He asked if I had any questions, I looked straight at him and asked: “Am I going to die?” His reaction reminded me of a cartoon. He was so surprised that I had asked him such a direct question that his jaw (and those of the group of students with him) dropped open.

I think my diagnosis was exceptionally hard for me and my family as we had seen my little cousin get so poorly and lose his life to this dreadful disease. I needed to know straight away if it was going to get me too.

In August 2003, they started running a whole bunch of blood tests, CT scans and even an ultrasound (the cyst I had on my brain was one usually found on kidneys).

I discovered – fortunately for me – that my tumour was an operable low-grade astrocytoma. The brain tumour and the Cyst were successfully removed with surgery. I received radiotherapy to ensure any remaining cells were destroyed.

My mum remembers vividly when I came home from the hospital. She was on tenterhooks in case I had a seizure. She said that I wanted to have a bath and was taking ages, so, out of worry she came in and pulled the plug. I found that quite amusing.

The radiotherapy caused my hairline to recede particularly on the right-hand side of my head where the treatment was most focused. It hasn’t really grown back properly but it’s my war wound and I am quite proud of it.

For me, coming to terms with what had happened to me was very difficult. While I focused on being positive I had a number of family members who would call me and cry down the phone with the belief I was going to die – just like my cousin 11 months before… what are the odds of two members in one family having to deal with brain tumours within such a short period of time?

That was hard, I tried to hide the fear I felt – telling them I was going to be fine on one hand yet, on the other, sitting on the balcony outside my ward and sobbing uncontrollably in private.

How are you doing now health-wise?

I was given the all-clear on St Patrick’s Day 2014 and discharged from any more appointments or further MRI check-ups. I emerged from the outpatient clinic with tears in my eyes.  I called my husband and my parents to tell them about my amazing news.

I remember sitting on a bench just outside and I saw another patient heading inside accompanied by her support. That was a poignant moment for me as I knew that while I’d got to the end of my hospital journey, others were just beginning.

I took redundancy at the end of June 2019 – I’d been in the same organisation for nearly 20 years. Since taking my career break I’m thrilled to say that I’ve had the chance to fulfil a lifelong dream of riding a horse along a beach, right next to the sea.  As far as deciding what I want to do next, I’m still not sure.

Any advice you give a brain tumour warrior or loved one?

Do you support any brain tumour charities?

I persuaded a friend to join me on The Brain Tumour Charity 10KM Walk together we raised approx £1,300 (we expected £150). 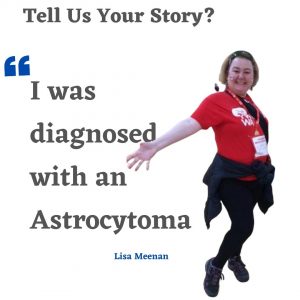 I couldn’t have got through that experience in my life without the love and support of my family and friends – I had over 120 cards and gifts during the three weeks of being in the hospital and so many visitors and calls from around the world.

At the moment now in 2020 my motivation is to get fit and healthy.  Since I was ill, I’ve put on so much weight.  First weight gain was from the steroids I was on. I’ve been on a rollercoaster of weight loss and gain ever since.

Val – a friend I made on waking up in hospital – she was 20 and had already gone through so much when I met her. She discovered she had a brain tumour aged 16.  When I met her, she’d just suffered a collapsed lung.  She had already endured three craniotomies, got through a stroke. She was learning to walk, talk and use her left hand to write (she was originally right-handed).  She was an inspiration to me. She never stopped.

Her boyfriend would take her out in a wheelchair.  Together they would visit the sights of London.  When I got to the radiotherapy section of my treatment, I got a message telling me that Val was back in the hospital, she’d developed a blood clot on her brain, was in a coma and was not expected to regain consciousness.

That girl did!  Her positivity rubbed off on me.

Conclusion: Thank you so much for talking about your low-grade Astrocytoma and your struggles. It is inspiring that you are still supporting charities. I look forward to seeing your next upcoming charity event.

Must-Have T-Shirts: “I Had Brain Surgery, What’s Your Excuse” 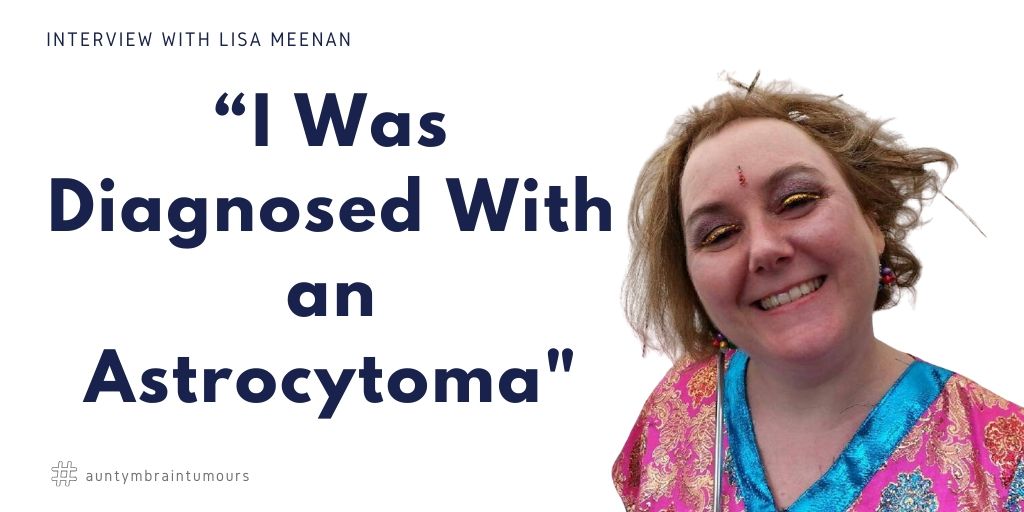 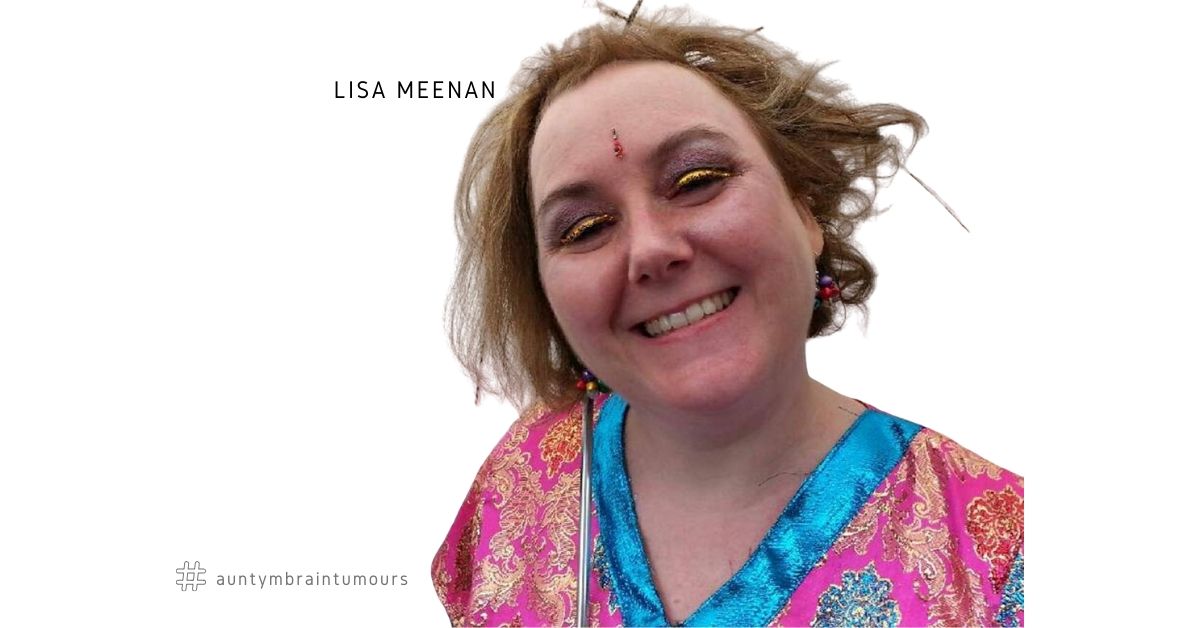