David Walker was just fourteen years old when he was diagnosed with a brain tumour similar to Russell Watson, He had a rare type of Pituitary Tumour. He was having terrible headaches and blackouts at random times. Here is his story.

What were your Pituitary Tumour symptoms?

My symptoms started in when I was six years old, in 1998. I was having terrible headaches. The headaches would get so bad and, over the years, they began to cause a blackout. The headaches came on twice a year for a couple of weeks at a time (June-July and December-January), and were so bad by the end I would be sent home ill.

As I was at school or at my grandmother’s home when these episodes occurred, my parents did not realise the severity and believed the doctors, who’d given multiple diagnoses over the years, finally telling my parents in 2005 that I was attention-seeking.

Eventually, I had an MRI which confirmed I had a brain tumour, initially suspected and later confirmed as a craniopharyngioma. This meant that my pituitary was crushed by the tumour every time it grew, causing my headaches and blackouts as the brain shut off all bar the essentials to look after itself.

“I was diagnosed with a Craniopharyngioma on Valentine’s Day, 14th February, how ironic” – David Walker

I’m out of the woods tumour-wise (still on scans every 30 months as a precaution), I’m having to battle my weight (my hypothalamus was severely damaged during the surgery so feeling full is something I don’t feel naturally unless I’m about to pop. I also experience a lot of fatigue from my weight and other meds (steroids for my kidneys, immune/adrenal system and thyroid, totalling 16 tablets on a good day!) but I get by, although I do tend to use a day off a week just to crash and rest.

I Thought I Was Going Through Menopause, But It Was A Pituitary Adenomas

I work in a call centre and am waiting on hearing back from an interview for another job (also in a call centre in the same field but working directly for the company instead), so fingers crossed! This is the reason I love my job. I work for a large company but I feel I’ve helped a fair few people manage their bills/repayments, get the help they need, etc. and I love 99% of my customers (I will have at least half a dozen a week that I want to keep!)

The toughest challenge since diagnosis was once my weight and getting a stable scan. My tumour now seems to be gone and now, although I’m still morbidly obese, my weight gain has stopped (well, maybe a pound on here, two of there, etc. you know). Nowadays, it’s a lot about my fatigue and, at times, mental health. There are times things will happen and it goes back to “what if I’d not woke up from my op?” and “what if I’d not had a brain tumour?”

“My Craniopharyngioma now seems to be gone”

Thankfully, I have found an unorthodox coping mechanism that works: “Tough, life didn’t go that way, you survived, do your best, make the most of the money your treatment has cost the NHS and show cancer/the brain tumour/Ty (I gave him a name!) who’s boss!” Cheesy, I know, but I’ve lost many of my friends who fought it bravely and I’m not taking its rubbish (there was going to be an expletive there but I’ll behave!)

My motivation is a bit cheesy but I think having a brain tumour does help you reevaluate things. My niece and nephews motivate me to be the best uncle I can be (two nephews and my niece are grown up – 2 at uni, one almost at that stage – whereas the other two are 2 and almost 4 respectively), to be for them if and when they need me.

Because of them and my other experiences, my end goal in life is to leave the world in a better place overall (be it leaving one more smiling person than frowning or whatever, if we all did this, the world would be a better place).

I have many personal heroes. The first are my friends who I met on the TCU, whether they’re still with us or have earned their angel wings.

Another hero of mine is a dog of ours, well two depending on if you believe in fate. We got a dog in October before my diagnosis, Oscar. He was the best rehabilitation anyone could have. A reason to get some exercise, someone to play with and someone who’d listen to you, wouldn’t pass judgement and wouldn’t tell anybody. Sadly, we lost him in 2013 to a car accident.

However, be it fate or the biggest coincidence ever, my parents adopted a dog, Rusty (pictured), a few years ago from a family friend. He is the spit of Oscar, albeit bigger (Oscar was a miniature Jack Russell cross, Rusty is a regular size Jack Shit, pardon my French). He is just as loving and he has a similar temperament and, to top it off, he was born mere months after Oscar passed.

In terms of interesting things, I’d have to say working with Durham Archaeological Services during my Year 10 work experience. My Head of Year had got me the place when Durham Uni sent out their WE places. Yes, it was favouritism, but I think she knew I was still struggling after my Brain tumour op the year prior, so thought something different would be the best bet. It was only a week (well, 4 days – I missed the first day to receive an award, the SAFC Shining Through Award, for getting through my Y9 Sat’s after my op), but it was really good.

Well, in the immediate future, I’m waiting to see if I get the job. In the not so immediate future, I aim to just enjoy spending time with all of my family. They’re not your average family but, at the end of the day, they’re family and that’s all that counts.

I launched the first official event for Sara’s Hope Foundation when they officially became a charity.

The charity runs a villa adapted to give kids, who’ve had cancer, and their families a holiday which they may not be able to otherwise. This is all in the memory of the couple’s eldest daughter, Sara who sadly lost her battle to colon cancer in 2001.

The event I launched was their Walk of Hope in 2007. At the time, my parents had a pub and, along with our then manager, we organised a fancy dress karaoke night to raise funds. Being based in a local village, many of us decided The Village People would be a good theme. Unfortunately, uptake was that high we had to create our own characters, resulting with me attending the event as a vicar.

Also: it may be a rare brain tumour but it has a claim to fame! It is the same type that Russell Watson was diagnosed with (plus I’ve met two other sufferers in person too!)

Conclusion: David Walker you are a  fighter. What a terrible way to come into your teen years. I am so glad to hear there is no sign of a recurrence of your Pituitary Tumour.  It is fantastic to hear the launch of Sara’s Hope Foundation and officially becoming a charity. 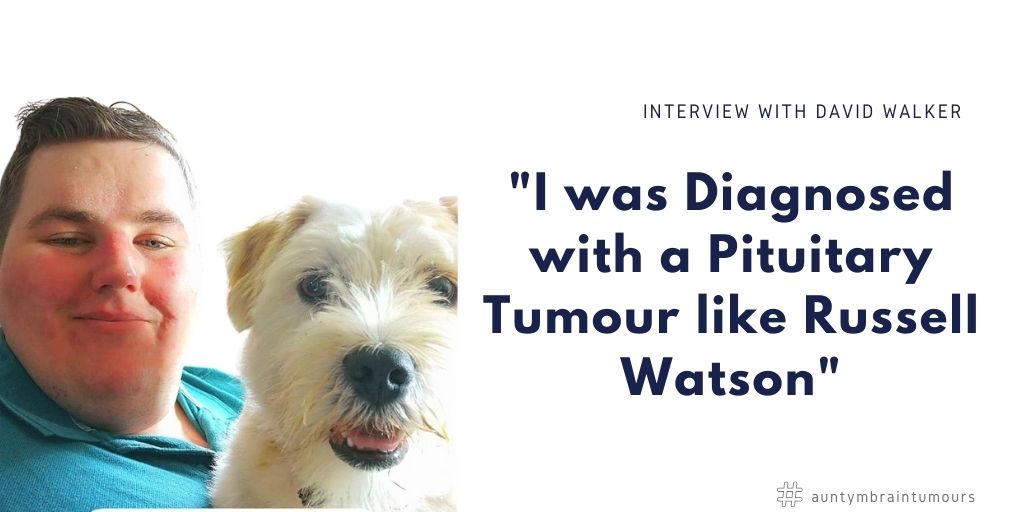