Leigh Melia, mother of two from Connecticut, USA, had been a healthy and active runner most of her life, but in January 2014 at the age of 36, her life was spun around. She was diagnosed with a left parasagittal meningioma. Here is her brain tumour story and how she hasn’t let her left parasagittal meningioma stop her helping other brain tumour sufferers.

What were your Left Frontal Parasagittal Meningioma Symptoms?

In Autumn, 2013 I was having trouble daily with a shoulder and knee discomfort which would cause me debilitating pain. My doctor put it down to my running and said my headaches may be connected to depression.

He wanted to put me on antidepressants, but I refused. I went to an eye doctor and they told me I needed reading glasses and that could help the headaches but they didn’t.

By December 2013 I could no longer wiggle my toes and I felt like I was dragging my foot when I ran. I decided to make an appointment with the Neurologist. He immediately did an MRI and came out of the room with a sticky note that said Meningioma and 5cm.

I had surgery two weeks later at Brigham and Women’s Hospital in Boston to remove my tumor. They were able to remove it fully and did not expect it to come back. However, in 2016 the tumor did grow back and in 2017 I was offered radiation or surgery, and I chose surgery because my tumor was Grade I the first time and I was afraid it was Grade 2 the second time because it came back so quickly and aggressively.

I chose surgery but when I woke up she told me I would still need radiation. (That was a tough pill to swallow) I had my radiation at Yale in New Haven, Connecticut. It was still a Grade 1 with characteristics of a grade 2, believe it or not.

Because my tumor was now a left parasagittal meningioma they were unable to remove it fully I was followed up with 30 doses of (IMRT) Intensity-modulated radiation therapy. My tumor, which is almost microscopic has been stable post-radiation!

The headaches decreased after surgery, the fatigue got better over time, my foot started working again and I no longer needed glasses! I am doing well. I do have some health issues that could be attributed to my surgeries/radiation or tumor but I feel they are under control.

I think the toughest challenge a survivor faces is accepting the new normal. I once heard someone say, “When air hits your Brain you’re never the same.”

I believe that is true. I spent too much time trying to be the person I was before my parasagittal meningioma and until I accepted that I was never going to be that person again for better and worse, was I able to move on and adapt to the new way of life.

I used to be a great multitasker but I’m not now, so I must focus on the task at hand. I had to learn new ways of doing things, this couldn’t happen until I could give myself a break.

For the family of those diagnosed, be patient and supportive. I am lucky to have an extremely supportive family. When I was first diagnosed my sister got on the phone and didn’t stop until she found me the best Neurosurgeon in New England.

My Mom has gone to many appointments with me, she still makes the 2 1/2 hour ride with me to Boston and my Dad drove me almost every day to radiation.

My husband did a lot of the child care and shopping when I couldn’t and he still lets me vent and supports us as the breadwinner.

What gift would you give a brain tumour warrior or loved one?

I would give a brain tumor survivor the gift of time.

I would tell them to give themself time to heal and take it one day, one hour, one minute at a time. Don’t give yourself a deadline for when you think you must be better. It takes time. If you need a nap take one. If the doctor says you will be good in 10 weeks and you aren’t that’s okay.

Do you support any brain tumour charities?

I am a volunteer advocate for The National Brain Tumor Society (NBTS). I found them in 2016 and they have been a great resource and support for me.

I have also gone to Washington DC with NBTS to lobby for Brain Tumor positive legislation and funding in Congress and House of Representatives.

I have gone for two years and this year in May it will be virtual. We have helped to pass the Childhood Cancer STAR act and are working towards passing the PCHETA act. Last year my sister and cousin joined me. 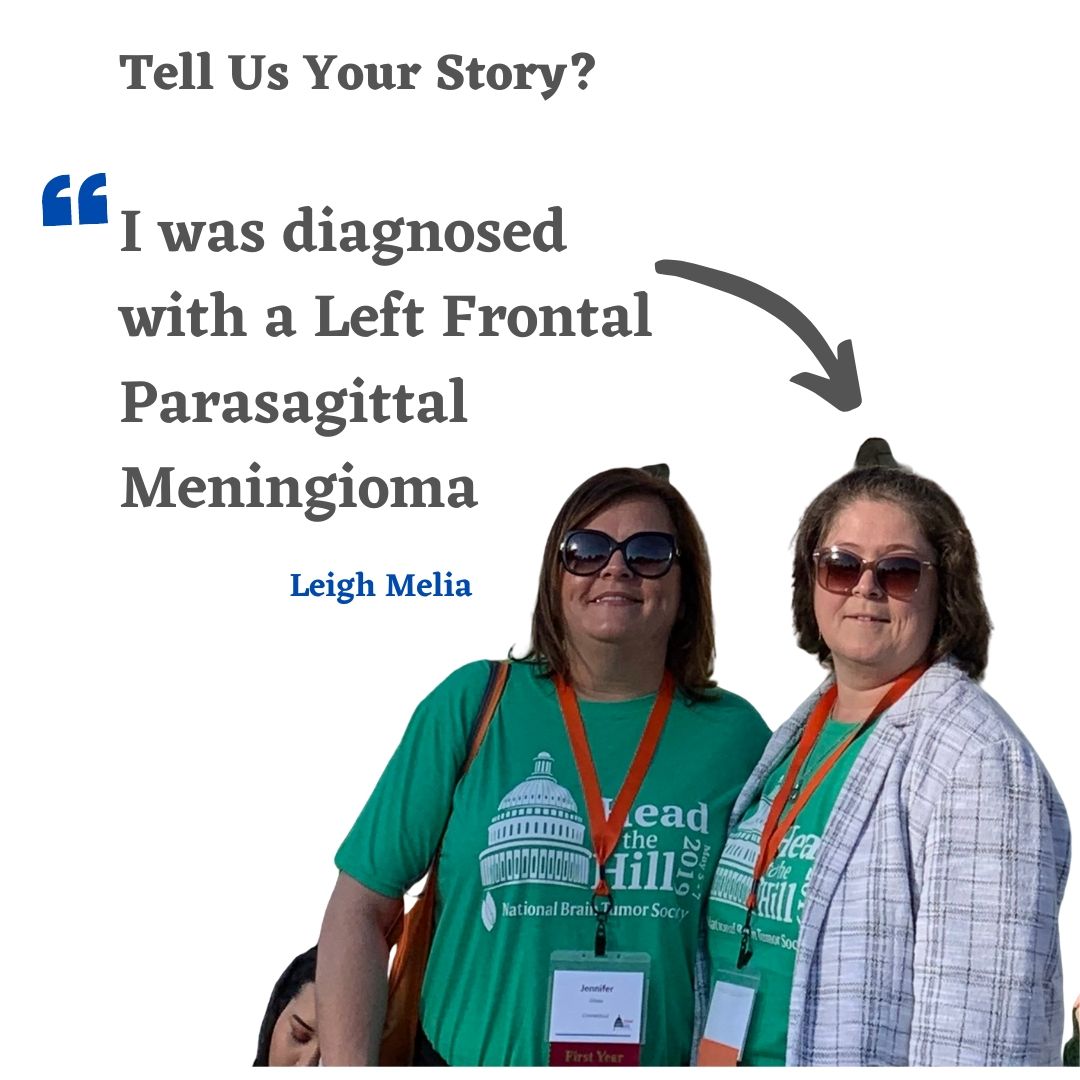 My children motivate me. My family calls me Mama Bear. I love helping others and helping others in the Brain Tumor community and working towards finding a cure keeps me motivated.

I am currently helping others by sewing masks for those in the community in need. I have to date sewed 65 masks for health care workers, elderly, children, and those with health issues.

I have a few heroes, my neurosurgeon Dr Alexandria Golby because she saved my life, and Bernie Sanders because he fights for the little people.

Also, I attribute my fast-growing tumor to the hormones in the water due to agricultural runoff. My family, including my pets, have stopped drinking the water for over three years now. Since my first tumor diagnosis, I have lost a dog at three to Grand Mal seizures and had a second dog develop a seizure disorder.

I actually have done the research, and conducted a survey on two Meningioma survivor Facebook pages on this and submitted my findings to my Neurosurgeon last time I was there. Which she said she would pass along to a colleague. I don’t know how seriously they took it. They are Harvard Doctors and I’m just a former Science teacher.

I am a former Agricultural Education teacher and Licensed cheesemaker. I own an Electrical and Construction business with my husband. But my claim to fame is that I have been an extra in two made for TV movies.

Conclusion: Leigh Melia you are an inspiration. I can’t believe the Doctor or maybe the radiologist left you with the MRI scan result on his desk before explaining it to you. It is amazing that you are now giving back and helping others. We wish you all the best with your Left Parasagittal Meningioma journey. AMAZING!

Question: Do you have a Left Parasagittal Meningioma 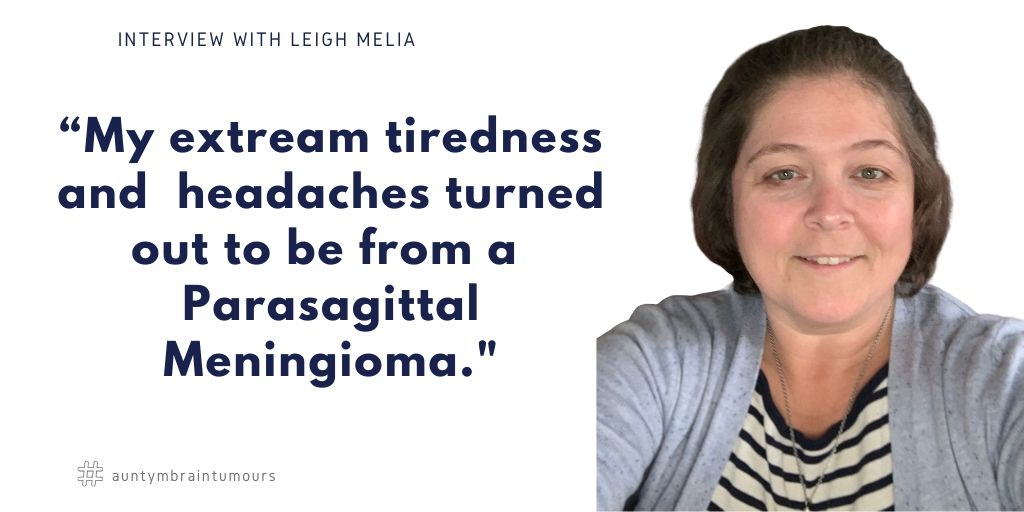