Dagmar Turner from the Isle of Wight is an International Violinist, Musician.  She was diagnosed with an Inoperable Oligoastrocytoma after having a seizure during an orchestra rehearsal in July 2013.

In 2013 I was in an orchestra rehearsal. Out of the blue, I had a seizure. I was sent straight to A&E for tests and a CT scan. The doctors could see after my scan that there was a mass in my brain. I then was referred to Southampton University Hospital, where there is a very good Neurological Department. I had a biopsy conducted which showed I had an Inoperable Grade 2 Oligoastrocytoma. I was given strong radical radiotherapy for 6 weeks until October 2013, followed by a 3-monthly watch and wait for the regime (MRI). In 2019 after one of my MRI’s they could see the tumour had grown and so on 31st January 2020 I had an Awake Craniotomy. They were only able to remove part of the tumour still.

It was very strange! I was a lot more relaxed than I thought I would be. My brain was mapped the day before and we had a bit of a practise-run while I played my violin at the same time. On the day of the procedure, I was sent to sleep at first and then woken-up.

I could see and hear the surgeons. I remember how bright it was with all these flashing monitors and how noisy it was. Lots of computers and fans going on. The fans did make me cold! Nothing one can do about it.

I trusted the team and let them do what they are good at!!

What made you want to play your violin during the operation?

Professor Keyoumars Ashkan was recommended to me by Helen Bulbeck from Brainstrust. Another great example of ‘it’s not about What you know, but WHO you know’. I was worried about losing my ability to play the violin during brain surgery, so I asked if I could play during the operation? They said yes!

Could you feel anything?

No, when they woke me up I remember I did not want to wake up when the anaesthetist tried to. It was very annoying since it was just like someone is trying to wake one up from a very deep sleep. I just thought please let sleep and go away until I realised that I was in my surgery.

After a few seconds, once I was more with it, I focused and took the violin and bow and started to play a few scales, followed by ’Summer Time’ from Gershwin ’When the living is easy’.

I thought I have one of the top surgeons here,  a team of 12.  It must really help that they can do the best for me. I am a great believer in teamwork.

The next thing I remember is that someone told me ‘Dagmar, we have just removed 95% of your brain tumour’. I was speechless since I was warned prior to surgery that by performing the awake craniotomy they may not be able to resect so much tumour, but, Prof Keyoumars Ashkan and his two young surgeons, José Lavrador and Matthew Gallagher, overachieved!!

The most important thing is for me and perhaps for other future operations for brain tumour sufferers, that it was more successful than anticipated!. I am eternally grateful.

How are you doing now health-wise?

I still have an Astrocytoma Grade 2 but I think I am doing fine. There are a few headaches which are part of the healing process. My left leg is not as stable as it was before. I am watching this carefully! We as a family are trying to not catch Covid-19.

Where does your passion for music come from?

I think it is in my DNA and very much the encouragement of my late father, who was a very good pianist, gave me. Also, my Mum, who is almost 87, still plays violin in a small orchestra in Germany, where I used to play as a teenager.

What is the best way for people to hear you play?

Come to the Isle of Wight when we have our Isle of Wight Symphony concerts, 5 times per year. The next one has been cancelled because of Covid-19. To find out dates check out iwso.co.uk

What other things do you do now in your life?

My awake craniotomy was videoed and the Press wanted to cover the story. There was a crazy media frenzy no one ever warned me about. I was omnipresent all over the world from UK, NZ over OZ and ZA, Columbia, USA, Spain, France, Germany, Denmark….Thailand….

My last Interview was last Tuesday with Prof Ashkan for a brief interview on the sofa of Holly and Phil at ‘This Morning’.

Definitely my husband Mat, who was from day 1 at my side to support me. It must be so hard for him.

There is also a very good friend, Jane,  who just came to the house and told my husband that she would be taking me from now on to my radiotherapy session in Southampton. She is an angel, she suddenly appeared. I feel for people who don’t have that personal support.

I am so grateful to all the people who this time reached out to help me and my family when I need help, give me lifts…or just pop in for a cuppa!

I have worked and studied in different countries, stayed with local families and eventually settled in the UK! but I was born in Germany. I love nice and fast German cars.  My mum told me that when I was five I told her, ‘Mum when We are grown-up we will drive Porsche!’… and we did approx 27 years later.

Something that still makes me smile to this day. I stepped in as a guide for an Italian junior football club while they came for a tournament to Germany. I just arrived back from a skiing holiday in Austria and my car (1970 Beetle in Sahara Beige) was still full of stuff. The Italians gave me a lot of tips because they thought I lived in this car… bless them!

Conclusion: Dagmar Turner you are fascinating. That is amazing you were able to show how brain surgery is not as scary as it may seem. I hope your Oligoastrocytoma stays small and does not cause you any problems for a very very very long time. 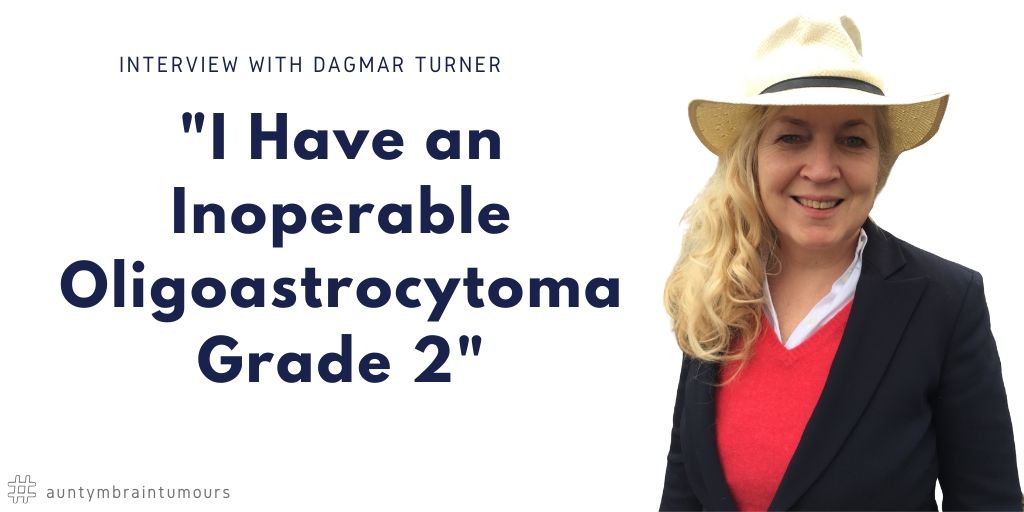