I have been Fighting an Pilocytic Astrocytoma for Over 15 Years

Interview with Claire Snyman: My Colloid Cyst Changed My Life

My Pineal Cystic Tumour Was Not Inoperable

Helen was Diagnosed with a Sphenoid Wing Meningioma 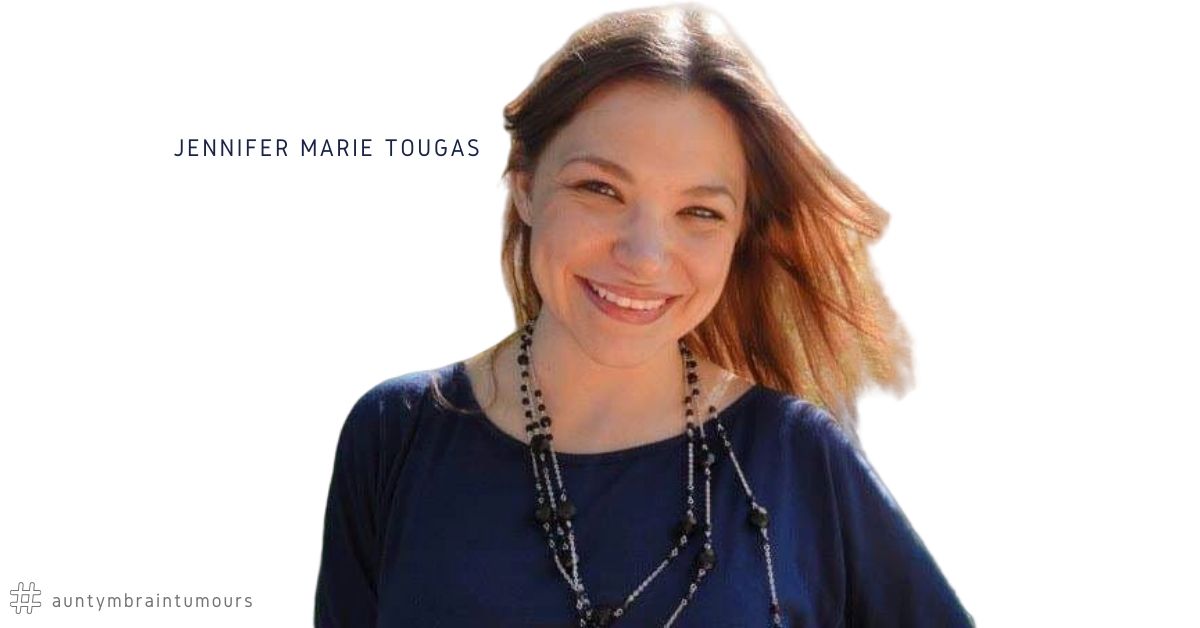 Interview with Jennifer Marie Tougas who is fighting an Anaplastic Astrocytomas.

Jennifer 33, from Massachusetts, was diagnosed with a Diffuse Astrocytoma in 2008 when she was just 21. She then was diagnosed again in 2017 with an Anaplastic Astrocytomas. She has had three brain surgeries and radiation with proton therapy, Jennifer has never lost her faith in God. She wants to inspire other brain cancer fighters and raise the profile of brain tumours. Sharing her unbreakable faith in God and his plan for her life. 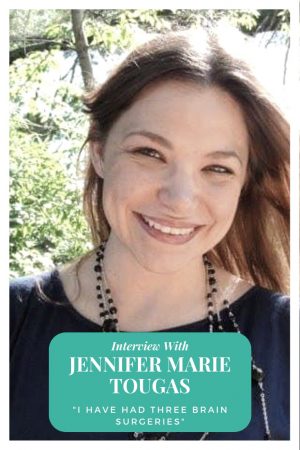 Hi Jennifer, when were you diagnosed?

I was 21 at the time of my diagnosis in 2008. It was by chance that my brain tumour was discovered.

I was hanging out with a group of people, and I fell. I broke 4 ribs and punctured a lung While in hospital, I was also given a brain MRI and Cat Scan to be sure I hadn’t done any damage to my head.

After my diagnosis, I had my first brain surgery on August 8th 2008 to remove the Diffuse Astrocytoma, and it was successful.

The doctors believe my first tumour was growing at a slow rate since I was a child, and it may have caused me to have some emotional problems because that’ is one of the things the right frontal lobe controls. I always had trouble with handling stress and had a lot of crying spells as a kid and felt really disoriented and out of touch with my surroundings.

I can’t say I was 100% after brain surgery! As I still had symptoms in the nine-year.

I had genetic and autoimmune stuff I was trying to figure out along with some hormonal problems, so during the 9 years, I was trying to sort through why I was feeling so terrible all the time.  I would sometimes get numbness and tingling in my hands, lips and feet. I had a lot of random symptoms that seemed to have no cause.

My Dad was getting concerned about my problems and that I hadn’t had an MRI for so long.

I then was given an MRI which showed up a second tumour. I had brain surgery on March 2nd 2017 to have it removed but it was not possible to remove it fully. Therefore they got out as much as they could, but it was bigger than the first and therefore left me with temporary left side paralysis.

Unfortunately, just nine months later the tumour had returned AGAIN! I was having a lot of grand mal seizures at that time. It was one massive seizure that confirmed the tumour was back for the 3rd time.

My invader is currently stable, and on my previous visit, they said it actually shrunk. I’m so grateful for that. I will be having regular MRI scans now to keep an eye on the tumour. But at this time, I am doing much better!!

In 2018 I went to Boston to have Proton Therapy to shrink the tumour even more. 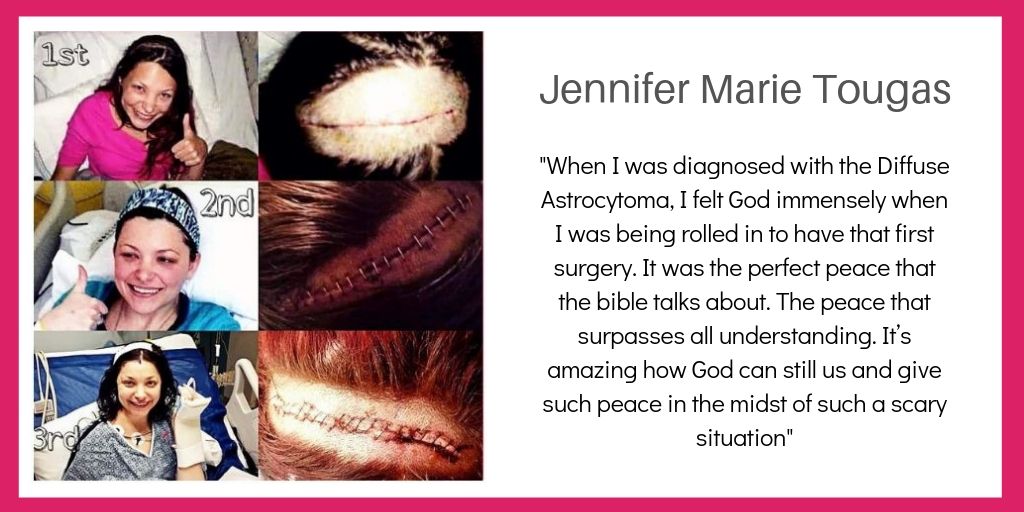 I’m slowly making progress, but I still get head and neck pain. I wear earplugs to help with getting overwhelmed with too much noise. I get a lot of neuro fatigue as well.

When I look back now before my original diagnosis, for years, I was lightheaded, dizzy, had pressure sensations in my right frontal lobe.  I had nausea and blurry vision, especially in school, when trying to look at the chalkboard with the lights being so bright. I had hypersensitivity as well as mood problems.

I did go to the doctor about my symptoms, but they misdiagnosed me, and it was never looked into any further.

I mostly try to raise awareness about brain tumours, and I am just working on fully recovering. I read a lot and enjoy the outdoors and love photography and singing. I read my bible a lot.

God, helping others and trusted Family and Friends.

Who is your hero?

When I was diagnosed with the Diffuse Astrocytoma, I felt God immensely when I was being rolled in to have that first surgery. It was the perfect peace that the bible talks about. The peace that surpasses all understanding. It’s amazing how God can still us and give such peace in the midst of such a scary situation.

What are your favourite Verses in the Bible?

I can do all things through him who gives me strength.  – Philippians 4:13

My grace is sufficient for you, for my power is made perfect in weakness. Therefore I will boast all the more gladly about my weaknesses, so that Christ’s power may rest on me. – 2 Corinthians 12:9

Trying to live a normal life and making friends and keeping healthy relationships. Both the physical and or emotional obstacles daily.

Just keep allowing God to use my story for His glory. To continue in this long healing process and keep taking one day at a time.

There is always hope. Even when the doctors give you a time frame of how much time you have left.

I’ve talked with others who have far surpassed the time they were given. Some are here even 20 years later.

I tried out for American idol in “2009” a year after my first craniotomy. I got cut right before I got to meet the judges. It was the year Kris Allen won. 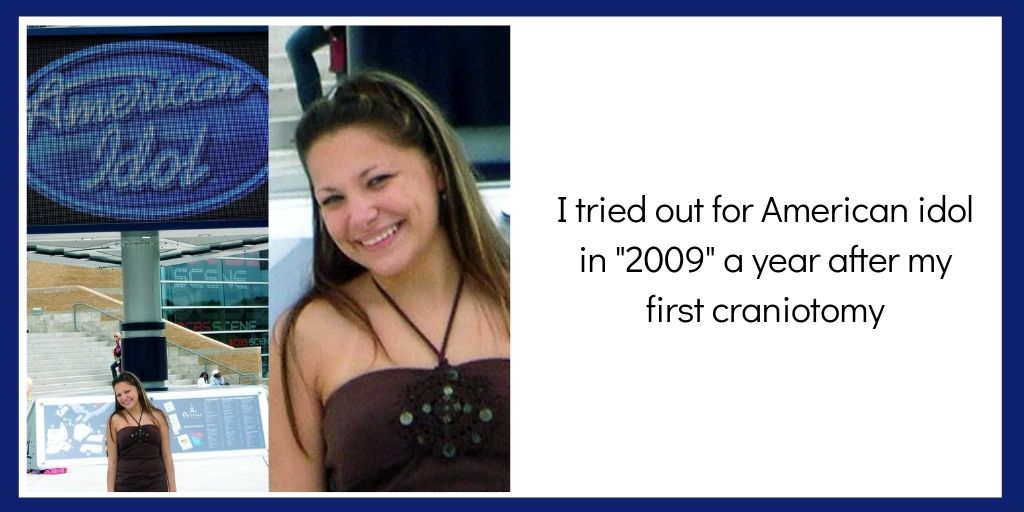 Conclusion: Jennifer 33, from Massachusetts, you are an inspiration! It is wonderful to see how strong you are and your open love of God.

Claire Was 25 When She Was Diagnosed With a Meningioma 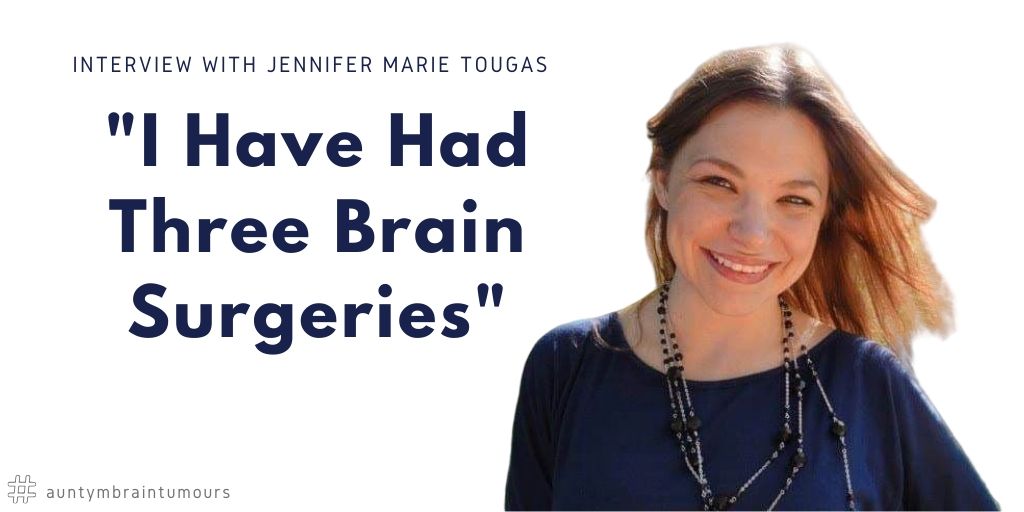