Emily Hackworthy shared her story about when her mother was diagnosed with an Oligoastrocytoma in 2005. Emily was only 11 years old at the time of her mother’s diagnosis and remembers vividly walking home from school and finding her mother having a seizure on the floor.

Hi Emily, when was your mother diagnosed?

We had no warning signs at all. I came home from school and found her having a seizure. She got taken to the hospital and scans revealed an oligoastrocytoma, brain tumour.

To say I was scared was an understatement, the same for the whole family. My mum was operated on, and they debulked as much as they could, but because it was attached to the brain, they couldn’t take it all. It was from this day onwards that my dad had to give his job up and become her full-time carer.

The diagnosis brought a whole whirlwind of emotions with it for us all, in time my mum started having left-sided weakness and needed some walking aids, her memory was awful, her speech has also suffered as she can struggle to find the right words at times.

She was monitored regularly with scans and went four years before the tumour started to regrow. She underwent six weeks of intense radiotherapy at this point, and that killed the cells. Again we went another four years with no growth until it started again. This time she was put on chemotherapy tablets, and she took them for a year. This also killed the cells for a while.. it was again at the 4-year appointment the tumour started to grow.

It was monitored for a while and it was decided that because it was slow-growing, we could get through Christmas first before starting treatment if that was what my mum wanted. That brings us to January this year when another scan revealed her tumour had now spread to the other side of her brain and was looking much more aggressive. My mum started chemotherapy tablets straight away and is still currently taking them monthly. Chemotherapy obviously comes with a whole load of side effects itself. She is often sick, feels generally unwell and gets tired very easily, but she still puts a smile on her face every single day. She is an inspiration.

I still live at home to help my dad care for my mum. I help to make sure her medication is taken when it should be, prepare meals, take her out when she feels well enough and just generally try and keep her in as high spirits as she can be. I organise all her hospital appointments and then between my sister’s make sure she has transport to the appointments.

My mum motivates me. The fact that she can still smile after everything she has been through gives me that inspiration to carry on. She’s looked after me all my life, and now it’s time for me to return the favour.

Who is your personal hero, or are your heroes?

My mum and my nan are my heroes. I grew up seeing them look after other people, and they’ve made me the caring person I am today. They would always go out of their way to help others, no matter what they are going through in their own personal lives, and that’s just simply amazing and selfless.

Not sure what to put for this!!

I guess the most interesting things I find that I do at the moment are open days such as Colostomy UK’s big open day and Brain Tumour Support’s Health and Well Being Day… I will often volunteer at events like these because I find them so interesting and useful to meet others going through the same thing and to talk to different services that are out there. I know I’ve learnt an awful lot from attending these days.

What is the toughest challenge a carer face?

I think the toughest challenge is seeing your loved ones on the bad days and seeing them become a different person through an illness can be hard, but you’ve just got to hope that there are more good days than bad and keep smiling through them as best you can.

Next on my agenda is to hopefully treat my mum to some days out when she is feeling well and give her everything she deserves. I will also hopefully be doing some fundraisers at work for Brain Tumour Support and Macmillan in the near future.

Zentangle Art Helps Me Cope With My Inoperable Brain Tumour

I Have an Inoperable Oligoastrocytoma

I was Diagnosed with a Low-Grade Astrocytoma

Five sisters had a call that they will never forget

I’d say not to be scared of asking for help and just know that you aren’t alone in this fight. When we found out about my mum’s tumour turning aggressive earlier this year, I felt like our whole world had been torn apart. This is when I decided to see what support is available and I came across a charity called Brain Tumour Support. I’ve got to say the support we have received from them, especially me, has been invaluable. They run a support group at our local hospital for anyone that has been affected by a brain tumour diagnosis, and I go along monthly and I’ve found it so helpful to see and speak to others in the same position as us. The support worker that runs the group is so lovely and welcoming and I know I can contact her anytime if I ever have any queries or concerns or if I just simply want a chat. I would recommend them to anyone, as no one should feel alone with a brain tumour diagnosis.

I do quite a lot of voluntary work as well as working part-time. I volunteer for Girlguiding, Crohn’s and Colitis and I am in the process of becoming a volunteer for Colostomy UK. Unfortunately, I took very ill a year and a half ago with ulcerative colitis and ended up having emergency surgery to remove my colon, and this left me with a stoma bag at the age of 23. Thankfully, I have been so much better since and now through volunteering for these charities I aim to help others going through the same as I did and hopefully show that being young with a bag isn’t the end of the world. It has given me my life back, and for that, I am very thankful.

I have an Ileostomy myself, I had mine through emergency surgery, so I had no time to prepare myself at all. I knew no one with a bag, and that made me want to raise the awareness, even more, to show people that they are not alone and that we can still live perfectly healthy lives with a bag.

Most people think it’s only older people who need a bag and I want to show that young people can also need them and there’s no shame in it.

What led you to need an Ileostomy?

I was diagnosed with ulcerative colitis in December 2015 when I was 21. This is a disease in the bowel and affects the large intestines. I tried so many different medications – at one point I was taking 30+ tablets a day as well as having infliximab infusions at the hospital. In 2017 things got so bad that I was in and out of hospital all the time, I could barely do a shift at work, had no social life because I was so poorly, I couldn’t eat anything without being instantly in pain – I had no life. In December 2017 I was told I needed emergency surgery and that I would have a stoma bag – less than 24 hours later it was all done and I began my road to recovery. I am now just over a year and a half post-op and I have my life back. I work part-time, have a great social life and I can eat with no pain!! 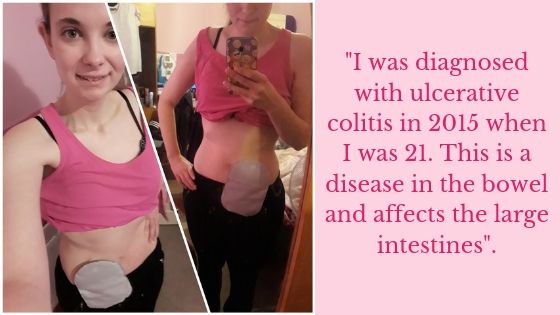 What support have you found?

Not long after leaving the hospital after my operation, I found a support group in my local town for people with stoma’s called Shropshire B.O.T.S (Bums on Tums). I went along just 4 weeks after surgery and was amazed to see so many others in the same position as me, yet you would never tell by looking at them. This group has helped me so much in realising I am not alone.

I have also found Crohn’s and Colitis, Colostomy UK and The Ileostomy Association very helpful – the websites have so much information on them about everything you can think of and if you need someone to talk to there are helplines for these charities as well which is great.

What advice would you give a young person with a Colostomy?

I would just say to take each day as it comes and to know that there is no shame in having a bag at all. You can do absolutely anything that a person without a bag can do. Mine gave me my life back, I never want to go back to a life of pain and medications.

Conclusion: Emily you are amazing. You have gone through so much so young and yet your spirits are high and it is really humbling that you still want to help others. 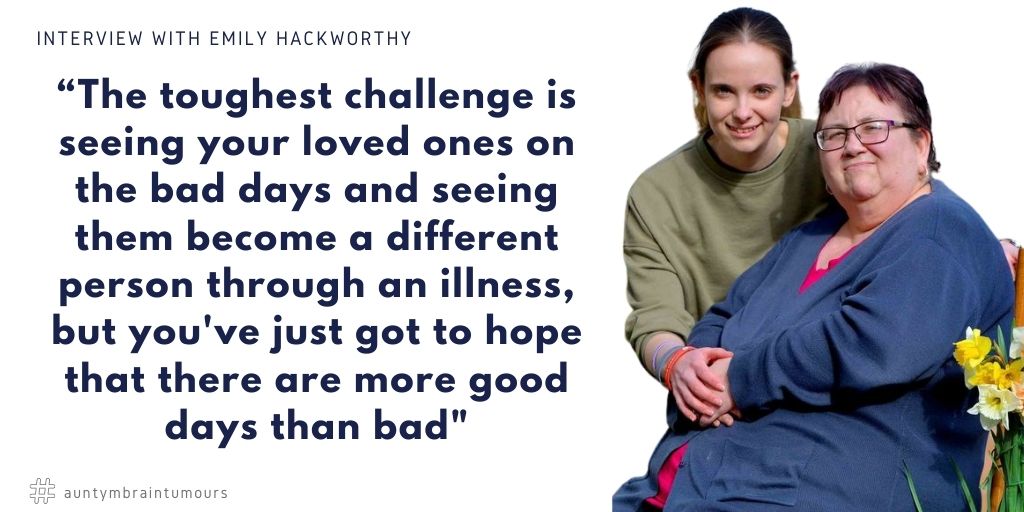