The day Linda was told her son had an ependymoma was the day her life changed forever. After going through a nightmare of a time Linda doesn’t want any other mother to struggle the way she did. She went on to support a charity called Astro Brain Tumour Fund. A charity dedicated to Working to find a cure for low-grade astrocytoma, oligodendroglioma, oligoastrocytoma and ependymoma brain tumours.

Hello, I am Linda. It all started when my son David, at the time, already had Cancer, Hodgkin’s Lymphoma, which was diagnosed in 2004 and had surgery and Chemoradiotherapy for that and was in remission.

We were celebrating him virtually being discharged from the hospital when in the summer of 2008 he started being very very tired. Very fatigued. He would sit down and fall asleep looked dreadful and just really washed out all the time.

We got him to the GP because we were concerned about his previous cancer. They did blood tests but, nothing showed up. Then in July, he started vomiting, and gradually it started off as a little bit and then it progressively got worse and worse and worse.

The GP prescribed him some medication for his stomach. That didn’t do any good at all, and then one night he was vomiting so severely that we decided to take him to hospital. They didn’t see any problems and were going to discharge him.

David actually very obligingly vomited coffee grounds blood in the doctor’s surgery. So they admitted him. He was there about four or five days, they did various tests, and then eventually sent him home saying he had gastritis.

Within a few more days David was vomiting again. We took him back to the hospital, and they admitted him yet again and kept him in for 24 hours. They discharged him the following day at 3 o’clock. I picked him up from the hospital, and we hadn’t even got back to the car in the car when he was vomiting in the bushes, and I just said to him. I’m sorry my love, but I am just not taking you home.

We went back in to speak to the doctor, they said we had to go through the A and E. So we went down to A and E and waited another five hours. Finally, they said they would admit him in that night and do some tests. I went home and eventually went to sleep. The phone rang at half-past eleven, and they said that he was being discharged the following morning as there were other people more urgent who needed the bed.

I don’t want to denigrate the hospital anyway, but I was appalled when they said they were discharging him.

The next morning we went down to the GP and asked to be referred to a private doctor. It was all sorted very quickly, and we had an appointment for later that day.

The doctor rang me up and said he has an abnormality in his brain. They immediately took David into care and gave him an MRI.

The doctor rang me up and said he has an abnormality in his brain. Apparently, it was a brain tumour, by that time it was so bad that it was actually blocking the drainage of his spinal fluid and that was what was causing all the pressure in the brain and causing the vomiting. Thus within a few days, David was operated on.

Thankfully, David’s operation was a success, but he needed to have radiotherapy. He still has problems postoperative which he has to again deal with, but at the same time, he has done incredibly well.

He and I have our arguments now and then as a mother and son do, but actually, when I get the chance, I like to say, you know, I am so incredibly proud of him. What I describe as his stubborn streak, which gets on my nerves. Most of the time is what has actually pulled him through.

After David came home from the hospital and he got over the radiotherapy you go into that world of ‘I don’t know where we are what we’re doing now’. What’s this all about?

Looking for support on the internet and I literally stumbled across Katie Sheen who is the founder of Astro Brain Tumour Fund.  I was on the right website. A charity dedicated to Working to find a cure for low-grade astrocytoma, oligodendroglioma, oligoastrocytoma and ependymoma brain tumours. They focus on supporting patients and families and raising funds for research.

I have found them so helpful. It’s a small charity and every penny that is raised for it goes towards the actual research apart from minimal admin costs. None of the people who run it take up any payment. 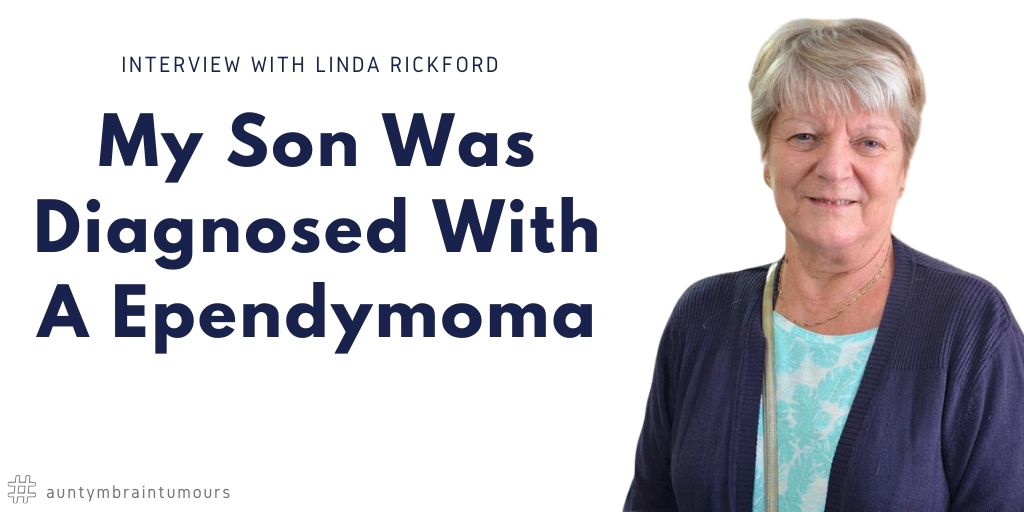