Dr Nadège Presneau from London was diagnosed with a Hemangiopericytoma in 2019.  Nadège’s career as a senior lecturer, focusing on Molecular Pathology and Cancer Genetics/Genomics at the University of Westminster, has helped her deal with her diagnosis and recovery.

In 2018 I was starting to feel very tired and unwell daily. I started some clinical investigation as being cancer research I suspected something related to cancer might be happening to me. I was found to have some low level of thyroid hormones so decided with my GP to get some thyroid hormone replacement but I was still experiencing tiredness.

At the same time, some pelvic ultrasound revealed I had an endometrioid polyp so a surgical intervention got planned for the end of the year to remove it. At the same time, my Dad passed away from cancer and a few weeks later I experienced what transpired to be my first seizure which I did not identify as such at the time.

One day at the end of September I had completely lost consciousness in my kitchen and went directly to the GP who did not recognise the urge to get a scan. A blood test was done just to find out I had some anaemia so I was prescribed iron tablets.

I was very depressed, and I noticed my personality was changing. I put it down to work pressures and grief. As My dad had passed away from cancer earlier, I thought I was still suffering from the effects of this.

In November 2018, I went under general anaesthetic at University College Hospital London (UCLH) to have the endometrial polyp removed that the histology confirmed as benign.

The operation went well, but afterwards, the symptoms I was suffering did not subside. I was having terrible headaches and noticing other, more physical symptoms. Over time I was showing more unusual symptoms. I had headaches, imbalance issues and bladder (incontinence) problems. As things were not improving, I went to see my GP for surgery but the same thing nothing related to brain tumour symptoms were identified.

I had become really clumsy, falling off my bike and tripping over on the stairs and in the street. I was having frequent seizures and was feeling increasingly anxious and depressed.

My whole personality was changing in early 2019. I would often burst into tears at work. I developed an excruciatingly painful headache while I was teaching. Ibuprofen wasn’t helping at all, so my colleague and friend Miriam took me to the A&E department at the hospital.

It was there that a CT scan revealed a ‘suspicious mass’ on my brain. I was shocked, to say the least. The following day, I was transferred to the National Hospital for Neurology and Neurosurgery in Queen’s Square by ambulance.

I had initially told that the tumour was likely to be a meningioma because of its location and it is a common type of brain tumour. The craniotomy went ahead on Thursday, 7 March 2019, and lasted around six hours. I had a total resection, completely removing all of the visible tumours.

Throughout my treatment, I have found that my professional background is a double-edged sword. On the one hand, it helps in that I know what questions to ask the clinicians, but on the other hand, the more you understand, the scarier it can be. Following surgery, I was contacted by the oncology team and was given my molecular pathology report.

My tumour, it transpired, was a ‘grade 2’ HPC-SFT, classified as a malignant tumour requiring 6 months of radiotherapy to avoid recurrence and spread.  I coped well with the treatment and found it less frightening than I thought it would be.

Since finishing radiotherapy in mid-November 2019, I have been tired but was pleased to be feeling well enough to return to work at the beginning of December 2019.

My type of tumour is a source of anxiety every time I have a scan as it may return. Due to the brain tumour, I am now on treatment for focal epileptic seizures. I have a constant reminder of the brain tumour.

I consider myself lucky that I did not die, and apart from having simple epileptic seizures, I don’t have profound side effects or disabilities.

I am working full time as a lecturer in Cancer genomics/genetics and Molecular Pathology (biomedical sciences) and continuing my breast cancer research.

I definitely see my life differently now. I know life is precious, and I try not to get angry or upset with futile everyday things. I try to enjoy life as if it was my last day as the future is uncertain now for me.

As a patient with cancer, I want to help discover new treatments and understand more about rare tumours like mine.

My awareness of brain tumour signs and symptoms had also helped me to support my sister when she was not well herself and ended up being diagnosed a year after me with a spinal cord meningioma. 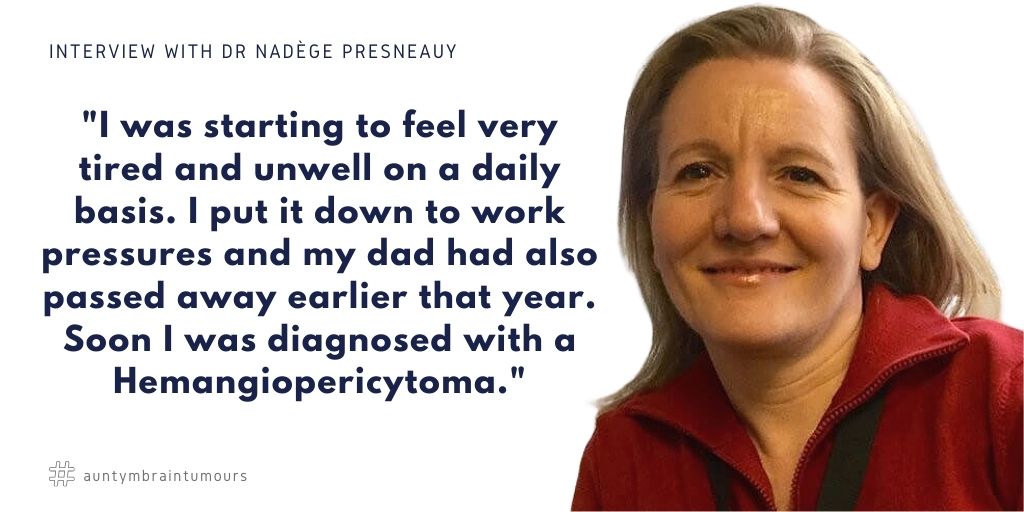