Emilia Williamson, 21  from the USA had been experiencing extreme migraines from the age of eight. Migraines ran through her family so she assumed it was nothing to worry about. After a routine eye check, she was advised to have an MRI. She never expected at the age of 17 to be diagnosed with a Mixed Neural Glial Tumour.

I went in for a routine eye appointment. My eye doctor and I got to talking about my migraines and how they were starting to move behind my eyes. So, he checked my optic nerves. He said they were slightly compressed and was hoping they were pseudotumours (false tumours).

He wanted to talk to my neurologist about scheduling an MRI. Monday, November 28th 2016, I went in for my very first MRI at 4:45pm. Around 6ish, the MRI was done but, the radiologist wouldn’t let me leave the room. She kept talking to me about my future and my plans after high school.

Finally, I was able to go back to the room where my mom was. All it took was one look at my mom and I knew my life was about to take a rocky turn. The neurologist on call was one my mom worked for, so he had already told her everything, which I had said beforehand I was okay with her knowing before I found out.

I wanted to wait for my surgery until after I graduated but the doctors said I wouldn’t make it. So, I really am lucky. I’ve had a lot of support from family, friends, and even my dad’s former co-workers. They’ve all helped me through these difficult times, and I couldn’t be more grateful.

I was told I had a Mixed Neural Glial Tumour. That night, the doctor told me I could either go home and sleep in my bed for what could be the last time, see my siblings and animals or, I could be transported by ambulance to Milwaukee immediately. I obviously chose the first one. I went to the children’s hospital the next day. My brain surgery was 3 days later.

I spent 2 weeks in total in the hospital, at least 18 MRIs in those 2 weeks, countless IVs, so many blood draws and a lot of tears. I left about a week before Christmas break. I got all caught up on my homework during break, did all my tests and quizzes that I missed and graduated January 20th, 2017.

After my surgery, I had 3 seizures while pregnant from the scar tissue on my brain and the stress on my body. The first one was at Milwaukee museum in the gift shop. I was holding my little brother’s hand when it happened and my other little brother caught me and helped my mom lower me to the ground. He then took my 2 siblings out of the gift shop so they wouldn’t see me seizing and get scared. I have no idea how he was able to stay calm.

Later found out they were from the stress being put on my body because I was pregnant. I had a beautiful baby girl on November 21st, 2017. Her due date was December 1st, 2017, exactly one year after my brain surgery.

I do still struggle, it has been 4 years since my surgery, but every day is a struggle. I have speech delays, short term memory loss, and I can’t focus very well. I still get horrible migraines behind my eyes but there isn’t another tumour. It’s just something I’ll have to live with for the rest of my life. I’m lucky to be alive. If I hadn’t of had the surgery when I did, I wouldn’t be alive.

My mum is the most important person. My mom has fought by my side, every single day since I was born. She has been my best friend, my biggest supporter and my biggest advocate. She pushed me when I needed it most, she’s been hard on me but it was for my own good. She is also the best nurse I know.

She stayed with me for 2 weeks in the hospital every day except one. And the only reason she left is because she had to take a test for school. She cried when I would cry, she laughed when I would laugh, she never once left my side. I honestly don’t think I would have made it through without her.

The toughest challenge I faced was struggling to push through. I felt so weak and unmotivated. Laying in a hospital bed for 2 weeks made me want to die, honestly. That’s a scary thing to think about, especially since I’ve never been the type of person who thinks about death or anything like that.

My advice to anyone, family or friend or stranger, is to keep your head up. You are A LOT stronger than you think you are. And, if you don’t have anyone on your side to help you through, I’ll be here for you. I would like to add that even when times do seem hard and it seems like you will never see the end of this, just remember you can’t give up because things get difficult. You have to keep pushing through.

If someone wants to give a gift to somebody in a hospital or in recovery, I would honestly figure out some of their favourite things. My mom got me Destiny from Finding Dory. You could also show up at their house with groceries like one of my dad’s co-workers did for my family. He surprised us with $200 worth of groceries plus some Meijer gift cards so we could get anything else we needed.

Random Question: Who are your personal heroes?

Other than my mum, 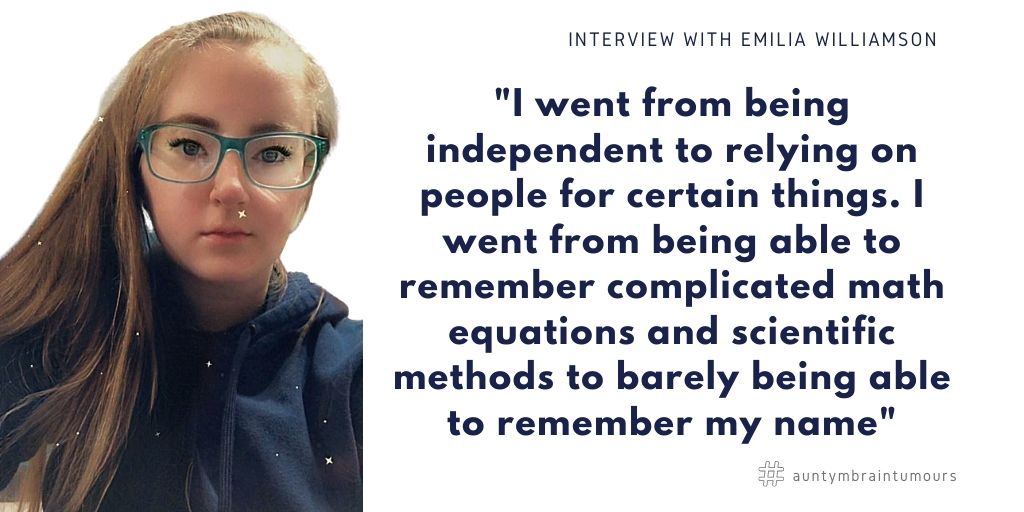