Fiona does not want any person to go through the pain her family have gone through and this is the reason why she is sharing her story and about a petition she sent to Parliament.

It is called – ‘Fund research for childhood cancers with the worst survival rates‘.

I am so grateful to be asked to share Logan’s story with you all.

Hi Fiona aka ‘Super Gran’, tell us about Logan and his diagnosis?

Logan was a happy, active 2-year-old who loved dinosaurs. His happy place was around or in water: baths, pools, puddles and if he couldn’t be in it, throwing stones and leaves into it.

He was a gentle, affectionate wee boy.

Logan had a new little brother Ezra who was born in October 2016. A few weeks after he became a big brother he began limping and his mum took him to the GP and to A&E. He was seen several times at the A&E outpatient department before a consultant noticed a weakness in the arm on the same side as the limp. An MRI was ordered, which given his age required a general anaesthetic, and later on the day of the MRI, we were told that he had a mass on his brain. We were transferred to Royal Hospital for Children in Glasgow and he was started on steroids and the tumour biopsied to confirm the diagnosis of DIPG. We had never heard of DIPG and struggled to take in the fact that in 2016 there was a children’s cancer for which there was no cure and Logan had it.

At the very beginning, in later November, Logan was so unwell there seemed to be a real possibility that he might not see Christmas or his 3rd birthday on New Year’s Eve. My daughter’s friends and local mother and toddler groups rallied round and he had an early Christmas party and a little while later an early birthday party. He had radiotherapy – anaesthetics every day for 6 weeks plus additional anaesthetics for planning and placing a central line. He finished treatment at the beginning of February and received no further treatment.

What were his symptoms?

Limp, one-sided weakness (hemiplegia) before diagnosis, balance issues after diagnosis. He was never very verbal and we never knew if his delayed speech was due to the tumour. He had a few issues with secretions – drooling but this was controlled well with medication.  In the latter stages, there was some vomiting and increasing weakness in his limbs. He was spared the worst of DIPG and didn’t lose his swallow, sight or hearing.

A DIPG is in the brain stem cell, it can’t be operated on. All radiotherapy can do is delay the progression of the disease.

Did your family find enough support from the hospital/charities/support groups?

Yes, the staff at the children’s hospital (Schiehallion ward) and the Beatson West of Scotland Cancer Centre were, with a couple of minor exceptions, wonderful, especially Logan’s outreach nurse and later on the play nurses from Crosshouse Hospital.

Clic Sargeant helped sort out finances so my daughter did not have money worries and various council and charity grants helped with treats for the boys.

Abbie’s Army provided invaluable information and we still raise money for them now in his memory.

We had 11 wonderful months full of smiles and fun. We had a Make-a-Wish trip to Croatia and two visits to Calum’s Cabin on Rothesay the latter a matter of weeks before he died. We were very fortunate that he was relatively well until close to the end and when he did go downhill it was quick and, for him at least, painless.

Tell us more about the Petition?

I started a petition ‘Fund research for childhood cancers with the worst survival rates‘ on the 20th February 2019 to ask the UK Government for more funding for research into this deadly disease.

It was only as my family and I entered the world of childhood cancer (and brain cancers) that we discovered how severely underfunded research into these difficult to treat cancers actually is. Cancer Research UK allocating less to 2% to all childhood cancer research is derisory (especially when they use children in almost half their advertising) and the UK Government figures are so opaque it is impossible to determine if ANY funding has gone to DIPG.

I feel personal guilt that I didn’t know these things before Logan was diagnosed and sometimes wonder whether, when I started work 20 years ago, if I had donated to childhood cancer charities, campaigned for awareness and more research funding as I do now there might have been a cure for Logan.

“I believe that Awareness + research = cure and in Logan’s memory I am determined there will be one, if not in my lifetime, certainly before Ezra has children of his own”.

We would really appreciate people’s support and sign the petition with us. Here is the link: https://petition.parliament.uk/petitions/269637 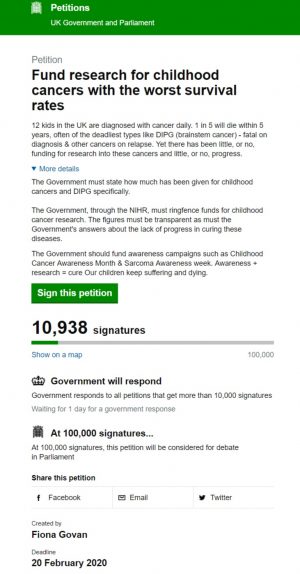 The parents and grandparents who, having lost their own child, choose to stand by those facing the same thing. That is what I now try to do.

Choosing to become a mother for the first time at 20 while at university studying law. I have never regretted that choice and if I had not made it I would not have Logan and Ezra.

Helping Others Helps Me Cope With My Diffuse Astrocytoma Fight

I really struggled with this one. My unfulfilled ambition (in my late teens) was to go to America and work Death Row cases with Clive Stafford Smith – until I heard him speak, I thought the death penalty made some kind of sense but I am now certain that a state cannot demonstrate that killing is wrong by committing judicial killings. I don’t regret the choices I made and my work and volunteering are in the criminal justice field on the side of justice and decency – it may not be as dramatic but it is satisfying.

Conclusion: Thank you so much, Fiona, for sharing your Grandson Logan Alexander Maclean’s story and about raising awareness for Diffuse Intrinsic Pontine Gliomas (DIPG).

You can find more about Fiona via social media: