Helping Others Helps Me Cope With My Diffuse Astrocytoma Fight

I Am Living With A Meningioma

Interview with Dan Mason: Dan, 34, is a Dad of two and was diagnosed with a Pleomorphic Xanthoastrocytoma in 2007. A rare and incurable brain tumour. He shares his story and how he copes with the unknown.

Hi Dan, when were you diagnosed?

It was in 2004 that I began experiencing strange sensations, such as a tingling in my left arm and shortness of breath, and weirdly enough, like I was biting into a lemon, even though I wasn’t! I passed these things off as either having too much work on or being overly tired. I was in the army, as a Port Operator and a Physical Training Instructor, and I was looking forward to making my career in the armed forces.

I did my best to shrug off the symptoms for 3 years but, by 2007, they were harder to ignore. I started having daily seizures and, although I never lost consciousness, it was really scary and horrible to go through. I would always have an aura before each episode, where I felt a weird sensation in my stomach and teeth, so would do the best I could to prepare myself. I remember running with several of the soldiers, that I was in charge of and having to carry on running, whilst having a seizure.

Nobody would know as I would hold the group back, have the seizure for approx 30 seconds and carry on. It happened lots of times whilst out and about with the troops. 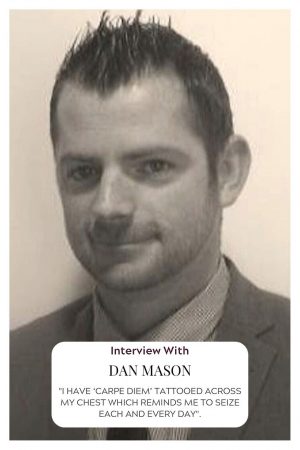 My GP referred me for tests to determine the cause. Nothing could have prepared me for what happened next: an MRI scan revealed I had a brain tumour. It turned out my seizures were acquired epilepsy due to the location of the tumour, and I was prescribed medication to try to control the symptoms. I was advised to “watch and wait” and not to undergo any treatment at the time.

It wasn’t until 2 July 2008 that things took a turn for the worst. I was swimming when I had a brain haemorrhage. It felt like I had been hit on the head with a cricket bat and I was rushed to Southampton General Hospital. The family was informed to prepare for the worst, I pulled through and I’m still going strong.

A biopsy the following January showed my tumour was a grade 2 pleomorphic xanthoastrocytoma, a very rare type of tumour, which was inoperable due to the location. I was advised to have radiotherapy so later that year, in July, I started several weeks of treatment.

I tried to keep my life as normal as possible throughout. Even by the fourth week of the treatment, I was still working in the army operations department and continued to go to the gym taking my troops out. Keeping fit and working hard gave me a lot of purposes and distracted me from my inevitable worries.

“Things hit home when my son Caleb, who was one, touched my hair and, as he did, it fell out. That’s when I knew I needed to rest and to take time off from work.”

I took around four weeks off sick as in that time I felt extremely tired and drained – I didn’t want to move from the sofa. On top of the radiotherapy, the doctors were still trying to find the most effective combinations of drugs for my epilepsy and this also took its toll on me physically.

Emotionally, things were tough. I remember standing outside the hospital, in my army uniform, crying. My friends and family members didn’t know how to react or how to comfort me and that was really hard to deal with. I found that being proactive helped keep me going and helped me to not overthink things.

After treatment, I had scans every six months. I was still trying to keep things as normal as possible so continued to work. While out on duty, I would have to plan where the nearest hospitals were, in case I suffered complications, but my colleagues and bosses were understanding. I even made it out to New Zealand for a 5-month exchange.

In October 2014, I was medically discharged from the Army due to my MED grade not meeting the requirements. I was fine but I had to give up the job I loved. It was really hard for me but I was very fortunate to move onto a role as an employment consultant for a building company the same year. My job started in Southampton, then in July 2015, we were moved to Plymouth as my wife, who works in the security branch of the Army, had been relocated. It gave us the fresh start we needed.

When I was first diagnosed, I had to give up my driving licence and this was by far the hardest part for me. Although I enjoy my job, not being able to drive means I have to be home-based. I am now faced with the task of trying to convince my doctors I’m fit to drive. It’s very frustrating as there have been times when I’ve got my licence back, only to have it taken away again, due to complications of my illness and the varying advice of doctors I’ve seen around the country. Even though I have epilepsy, changes in the law in 2012 stated that if I remain conscious before, during and after the seizure I’m allowed to drive. I’m frustrated that even now, in 2019, I’m still fighting to drive.

The fact I cannot drive also has a big impact on my wife, who often feels hopeless and stressed that she has to take on so much. My illness and having a routine scan around June or July also affects her; she finds it especially difficult and panics around the time of my scans, and it causes a lot of anxiety for both of us.

Caleb, who is now 11 and learning a lot about the world, was very inquisitive about my tumour. He used to simply refer to the tumour as the ‘lump in Daddy’s head’. He often asked me questions and wanted to know how I was. My daughter Daisy, has seen me have a few seizures and is still too young to explain.

I found it hard being one of the youngest patients in the room and this took me back to the dark times of my radiotherapy when I was in a ward full of older people. It reminded me how indiscriminate brain tumours are – here I was, a young and healthy man, afflicted by a debilitating disease.

“I have ‘carpe diem’ tattooed across my chest which reminds me to seize each and every day”.

It saddens me that, although I love to keep fit, I can no longer train, as running brings on my seizures. Despite so many setbacks, my motto is to think positive and be strong. I have ‘carpe diem’ tattooed across my chest which reminds me to seize each and every day. I think that my mental attitude has a massive impact on my health in general, so I try and focus on the positives.

Having documented my symptoms in a diary, my current prescription for my epilepsy is working well and I’m pleased that there’s been a reduction in my seizures. I have lost my drivers license for good now and the latest scan results from Sept 2019 are that the Tumour has not changed and it still remains the same. I am averaging approx 1 seizure a month now down from 8 ! I take 3 lots of meds however there are some complications such as short term memory loss, forgetfulness and fatigue.

I am now currently working as an Employment Consultant for Veterans.

my coping strategy is art. I love Pyrography, it’s the art of burning wood. I’ve been doing it just over a year now and have some stuff placed up in an art gallery. 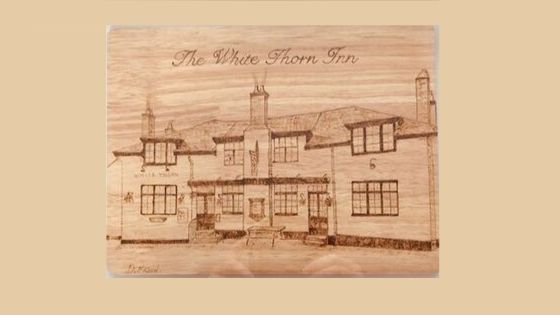 The unknown, and will I be here to watch my kids grow up

I have 2 Miltary awards for my service during my health crisis. These are part of the Queen’s birthday honours. They are called a Certificate of Meritorious Service. 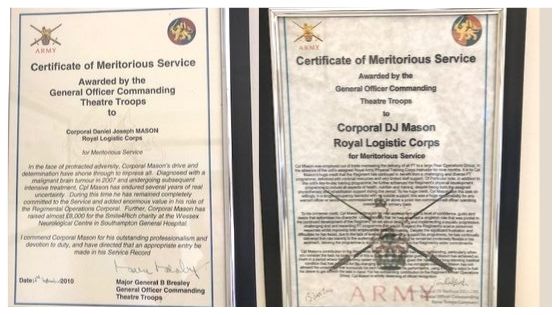 Tell Us The Most Interesting Thing You Have Done?

The most interesting thing I have done was jumping out of a perfectly fit plane – 21 Times in California.

What a challenge you have been set with. Your Pyrography is fascinating, I didn’t even know there such a thing. I wish you all the best with everything you do and I will be looking at your latest art via your Facebook Page. Thank you so much for sharing your story.